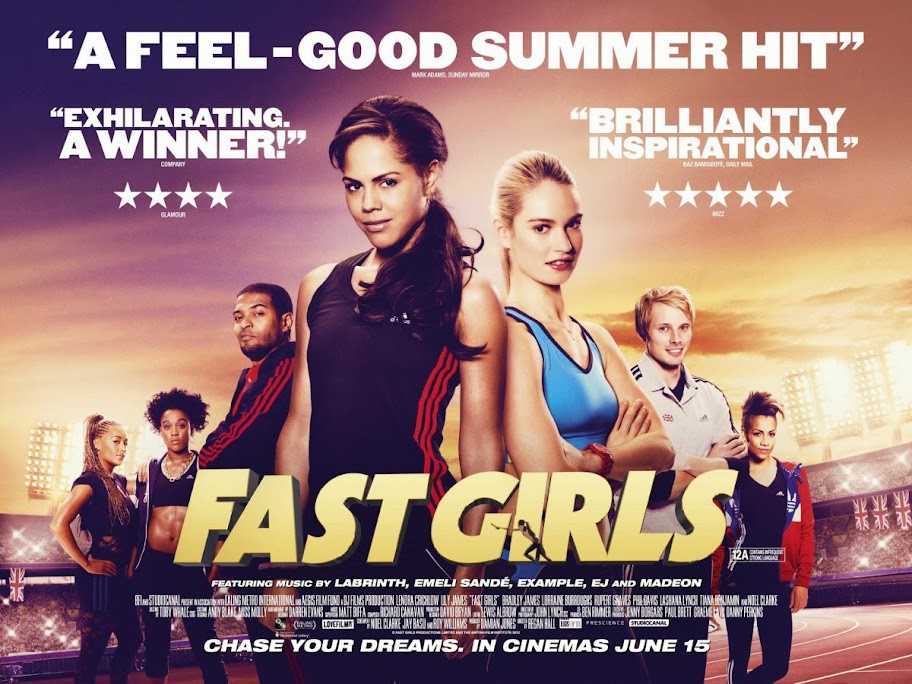 All the fast cutting, fast talking, pounding sound-tracks and nods to the London Olympic dream can’t lift this curiously old-fashioned sports movie out of the mundane.

Aside from the twist that it’s the women’s relay team that’s making the drama, there’s not enough budget or risk-taking to lift this innocuous TV-movie script beyond soapland and pop-videos. Plenty of charm, but it lacks the grit and ambition to rise beyond the bottom step of the podium.

East London sprinter Shania (Lenora Critchlow) trains wth shop-keeper and part-time coach Phil Davis to qualify for the British track and field squad, and, once in the camp, is selected for the women’s 4×400 relay.

It’s a true underdog’s tale of struggle; against class, the athletics elite, and a rival runner in the shape of golden girl Lisa Temple (Lilly James).

What do you know, there’s mistakes and tears along the way, family rifts, professional feuds, a tough coach (co-writer Noel Clarke), and athletics supremo Temple senior (Rupert Graves from Sherlock and A Very British Coup). There’s a dishy team physio, Carl (Bradley James – Merlin‘s King Arthur) to fight for along the way.

Can the fast girls overcome their prejudices and selfish ambitions to run as a team and win the World Championship? Will the risky American baton-pass work like ‘silk’ for the Brits and can they stay injury free for the finals?

What do you think?

I think we all know enough about the mechanics of top-level sport to know that anyone talented enough to make any qualifying times will be scouted and hot-housed in an intensive training programme, or simply drop by the wayside. Nobody these days makes it to the top with no money, no club support and no sponsorship; the plucky British underdog belongs to the 1960’s and 70’s and even Chariots of Fire had to delve back to the 1920’s to be credible.

While the supporting players do well, neither Lenora Critchlow (Being Human) or Lilly James (Downton Abbey, Wrath of the Titans) ever convince as athletes, no matter how many times music-video director Regan Hall fast-cuts or slow-mo’s them on the track.

The dialogue is leaden for much of the time, whatever a talented TV cast try to do with it and the plotting is entirely in kit-form; insert tab A into slot B and schedule the reversals of fortune like a Swiss railway timetable.

Clarke and Bradley James are criminally under-used as supporting players, while Phil Davis (Brighton Rock) does one of his kindlier cameos. The London sky-line features more heavily as a character than any of them, while on Shania’s council estate, no cliche of black British life is left unturned.

While Fast Girls may be an inspiration to girls in sport, and is a competently bolted-together generic sports movie, it’s no Friday Night Lights or Any Given Sunday, skimming the surface of both the athletics and the drama. I dearly wanted it to be more (confession time; I worked on it very briefly) than an easy watch on a weekend evening. RC

Robin Catling gained degrees in both arts and technology which led to a diverse portfolio of employment. A freelance systems analyst, project manager and business change manager for the likes of American Express, British Airways and IBM, he moved on to web design, journalism and technical authoring. He has also worked in film and television, both behind and in front of the camera, including productions by Steven Spielberg, Martin Scorcese, Ron Howard and Ridley Scott. A qualified three-weapon coach, he runs West Devon Swords teaching sports fencing to all age groups, and in recent years qualified with the British Federation of Historical Swordplay to teach medieval and renaissance combat in the Historical Western Martial Arts.
View all posts by Robin Catling »
« Humour: Never mix whites with colours
How-to: Core Values »