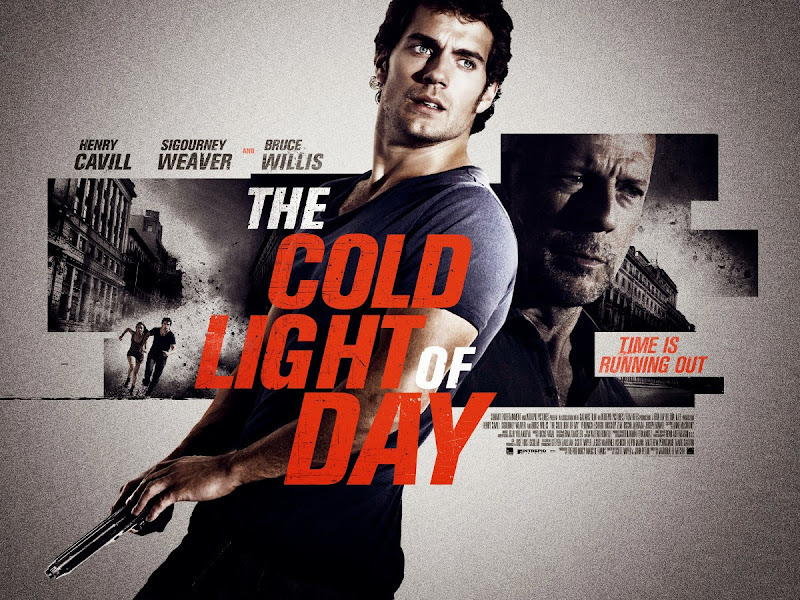 An American family takes a vacation to Europe which descends into car chases and shoot-outs, owing to the father’s shady past as a US master spy, and his son has to come to terms with his parents’ double life.

No its not 1985’s Target, with Gene Hackman and Matt Dillon; this time, dad Bruce Willis (Looper) gets himself shot and son Henry Cavill (Man of Steel, Immortals) has to pick up the pieces.

Throw in some kinetic, Bourne-type action, the car chase from Ronin, and an off-the-peg ice queeen performance from Sigourney Weaver (Paul, Abduction), and you get an efficient, if uninspiring thriller.

The plot won’t trouble a six year old, but the shootings and the beatings might. Cavill’s character Will gets shot, beaten, dropped off a building, thrown from speeding cars and tumble-dried in various car chases without a seat-belt, but manfully carries on in an effort to free mum, sister and younger brother from a terrorist gang – or the Israeli Mossad; for ruthless violence, there’s not much between them or Weaver’s CIA controller. If I were the Israelis I’d sue for defamation of character. If that were possible.

Cavill’s screen presence gets him through this murky tale of espionage. As is typical, the action is triggered by the loss of a Macguffin in the shape of a mysterious stolen briefcase – isn’t there always? What’s inside? We never find out and, know what? It doesn’t matter.

The whole thing is energetically directed in the style of Tony Scott by French director Mabrouk El Mechri, although I doubt any of the actors thanked him afterwards. Grouchy Bruce Willis disappears part way through, Spanish leading lady Verónica Echegui gets little to do and there’s no romance (for good reason).

Cold Light is largely and rather insultingly set in Madrid, where, apparently, the Spanish police stand about and get shot or else completely disappear, even when two Americans have a ten minute demolition-derby car chase through the streets and start shooting civilians at random.

Post-Bourne, Cold Light is an empty, by-the-numbers, mercenary exercise that lacks either a Matt Damon or Liam Neeson (although fortunately its better than the appalling Taken or anything directed by McGee).

Do yourself a favour, dig out the Bourne box-set or rent Hanna instead. RC

Robin Catling gained degrees in both arts and technology which led to a diverse portfolio of employment. A freelance systems analyst, project manager and business change manager for the likes of American Express, British Airways and IBM, he moved on to web design, journalism and technical authoring. He has also worked in film and television, both behind and in front of the camera, including productions by Steven Spielberg, Martin Scorcese, Ron Howard and Ridley Scott. A qualified three-weapon coach, he runs West Devon Swords teaching sports fencing to all age groups, and in recent years qualified with the British Federation of Historical Swordplay to teach medieval and renaissance combat in the Historical Western Martial Arts.
View all posts by Robin Catling »
« News
Movie catch-up: Holes (2003) »