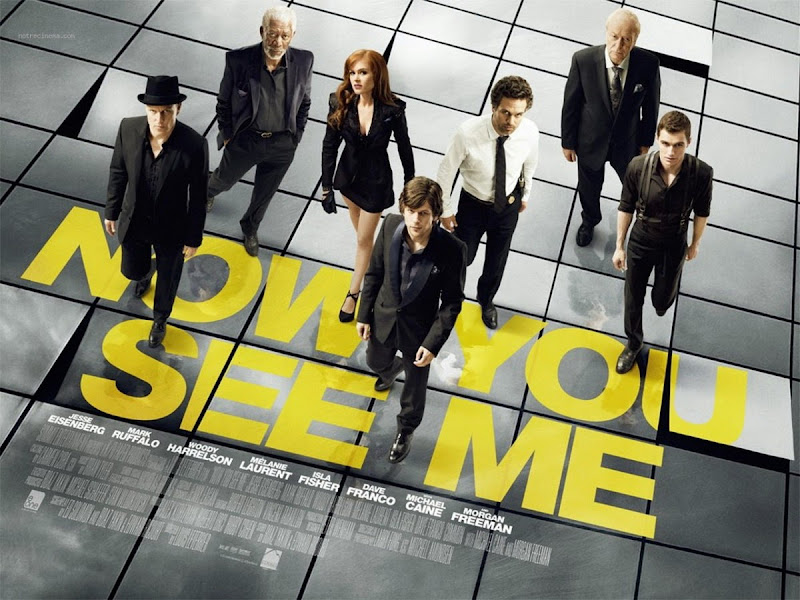 From the point it introduces Jesse Eisenberg, Isla Fisher, Dave Franco and Woody Harrelson as street magician, escapologist, hustler and mentallist, you think you’re in for a treat.

But it’s all about Mark Ruffalo’s shabby FBI man…

From a flashy prologue in which the four individual magicians are pulled together by an unseen puppet-master, to an even more flashy on-stage Las Vegas ‘heist’ a year later, the set-up is magicians vs. cops.

Can you rob a random Paris bank from Vegas in real-time and simply give away the money to the audience? Enter Mark Ruffalo (Avengers) as the head of a crack FBI team, Melanie Laurent (Inglourious, Beginners) as his Interpol liaiason, and the battle of wits ensues.

Who is the ‘fifth’ of the Four Horseman who’s really staging the increasingly complex heists and escapes? Who is on the inside, and can we trust anything we see on screen for the duration?

Eisenberg (Social Network, Adventureland), Fisher (Wedding Crashers, Gatsby), Franco (Charlie St. Cloud, 21 Jump Street) are attractive and lively as practitioners of the new magic, while the laconic Harrelson (Hunger Games) is clearly having a ball as the old reprobate hypnotist.

Into the middle of this are thrust Sir Michael Caine (Batman), doing one of his lizard-eyed corporate bosses; and Morgan Freeman (Batman, Shawshank) as the mercenary magician-buster, whose pat deconstructions of each heist are run out far too easily.

The FBI are the stuffed shirts in suits, with Ruffalo out of place from act one, a shabby and shouty young Columbo, continually outclassed by the magicians and thereby the most interesting charcter of them all. Not only does he have the biggest presence of the entire cast, but gets the lion’s share of the screen time.

Unfortunately he has precious little chemistry with Laurent’s Interpol agent, which is a mile away from, say, Brosnan/Russo in The Thomas Crown Affair, a particularly fine example of a heist movie.

Now You See Me has its three-act structure plastered like a giant billboard across the script. So tricksy is the setup, you know that nothing you see on screen can be trusted, you can’t rely on anyone being entirely who they seem; so can we the audience figure out what’s what before the FBI?

Sadly, yes. Although French director Louis Leterrier (Clash of the Titans, Transporter) speeds through this with style and brio, its no Inception. The layers peel away all too easily, the heists and escapes are far too complex and rely on way too much technology to play out in the real world. 360-degree holographic projector, anyone?

This is the problem with TV and screen magic, it just doesn’t have the fascination of the live, close-up, in-the-room magic show; there are too many ways to cheat even before you enter the fictional world.

Sit back and enjoy some top performers on top form in a stylish construction, but don’t be disappointed by the pat ending. Like most stage magic, Now You See Me is candyfloss and you know from the get-go you’re being conned. RC

Robin Catling gained degrees in both arts and technology which led to a diverse portfolio of employment. A freelance systems analyst, project manager and business change manager for the likes of American Express, British Airways and IBM, he moved on to web design, journalism and technical authoring. He has also worked in film and television, both behind and in front of the camera, including productions by Steven Spielberg, Martin Scorcese, Ron Howard and Ridley Scott. A qualified three-weapon coach, he runs West Devon Swords teaching sports fencing to all age groups, and in recent years qualified with the British Federation of Historical Swordplay to teach medieval and renaissance combat in the Historical Western Martial Arts.
View all posts by Robin Catling »
« How-to: ‘Pitch’ Perfect
How-to: Secure the Weakest Link behind the Keyboard – Part I »