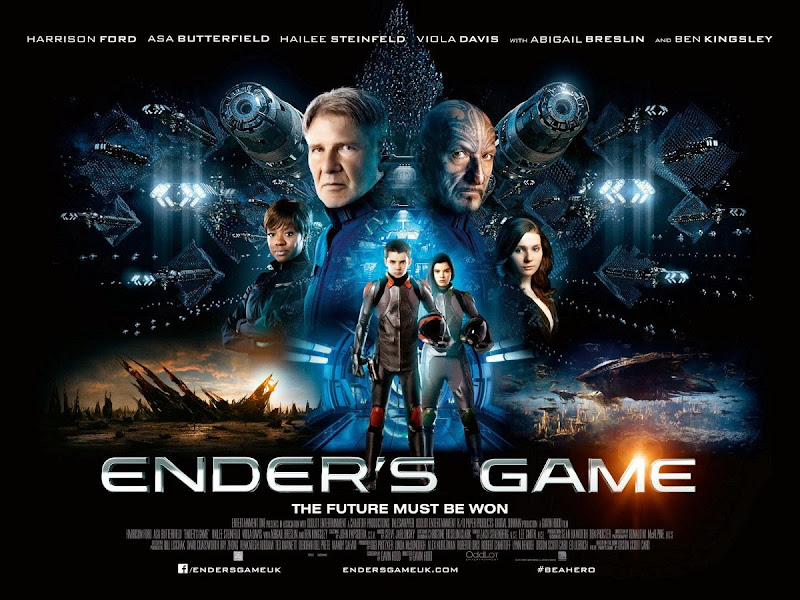 Fifty years after the insectoid Formics are beaten back from invading the Earth, mankind is breeding child soldiers whose video-game generation minds are best able to absorb the huge amounts of battlefield information. Groomed for command, brilliant misfit (aren’t they always) Ender may be Earth’s one great hope of defeating an unknowable alien enemy.

He even has a laughably comic name: Ender Wiggin. Third child alongside borderline psychopath older brother and overly compassionate middle sister, can Ender qualify for the training programme where his siblings failed? Can he cope with the loneliness of the long-distance (orbital and beyond) boarding school pupil? Can he withstand the endless line of school bullies? Will he knuckle down under the hard  discipline, or will his insubordinate streak see him washed out of the programme? Can loner Ender not only make friends but compel his motley crew of talented misfits (aren’t they always?) to follow his lead? Will Colonel Graff’s mono-maniacal insistence that Ender is ‘the One’ prove true?

I think we know the answer to all these questions. All that’s missing is a prophecy.

So what about some other questions? Where did second mentor Ben Kingsley get that South African ‘Kiwi’ accent and the man-eating Maori tattoo? What century are we in that Ender grows up in a remarkably cushy mid-American clap-board suburb straight out of Desperate Housewives? And why, with interstellar space travel, is so much of Ender’s boot-camp still straight out of Full Metal Jacket?

Do I step through the structure of Ender’s Game charting the predictable plotting of the mythic hero on his Grail quest, overlay Tom Brown’s Schooldays and Star Wars and include the three-act turning points? Or have I taken the mickey enough already? Probably. You can do that yourself.

The entire second act is taken up with Enders Full Metal Jacket space-camp adventure in orbital Hogwarts, complete with thrilling simulated battles in zero-gravity (Quidditch with ray-guns). With Nonso Anozie as the formidable Sergeant Dap and Moises Arias as repellent rival Bonzo to resist, Ender has to build Team Dragon to win the tournament and qualify for Command School. Of course, en route, he pulls the only girl in space, True Grit’s Hailee Steinfeld.

What Makes Enders Game are the central performances. Asa Butterfield (The Boy in the Striped Pyjamas, Hugo) is a compelling lead, both highly vulnerable and slightly scary. He avoids the twin pitfalls of being etiher a wimp or insufferable know-it-all, and holds his own against veteran actors.

Kingsley (Hugo, Ghandi) is out of place as the war hero fighter pilot. Harrison Ford (Star Wars, Indiana Jones) delivers a towering performance as Graff, a driven man pinning his and humanity’s hopes on a child-saviour in one last roll of the dice. Supporting players Viola Davis as Ender’s shrink and Abigail Breslin as sister Valentine provide the care and compassion.

Butterfield’s main achievement is to walk line between military ambition and moral crusader amid the obligatory ‘war is hell’ rhetoric.

Suffering slightly from compression of a big source book, Enders Game is a quality production with some thrilling moments – Ender’s exhilarating wild-card entry into his first zero-g battle. Oscar winner Gavin Hood’s direction (Tsotsi, Rendition) can’t wholly mask the manipulative cardboard script, but is a technical triumph nonetheless. It may be a little too hard-core sci-fi for the mainstream, but there’s enough Kubrick and Coppola in there to make a decent space adventure. RC

Robin Catling gained degrees in both arts and technology which led to a diverse portfolio of employment. A freelance systems analyst, project manager and business change manager for the likes of American Express, British Airways and IBM, he moved on to web design, journalism and technical authoring. He has also worked in film and television, both behind and in front of the camera, including productions by Steven Spielberg, Martin Scorcese, Ron Howard and Ridley Scott. A qualified three-weapon coach, he runs West Devon Swords teaching sports fencing to all age groups, and in recent years qualified with the British Federation of Historical Swordplay to teach medieval and renaissance combat in the Historical Western Martial Arts.
View all posts by Robin Catling »
« How-to: Secure the Weakest Link behind the Keyboard – Part I
News: Dyre Banking Trojan gathers pace »