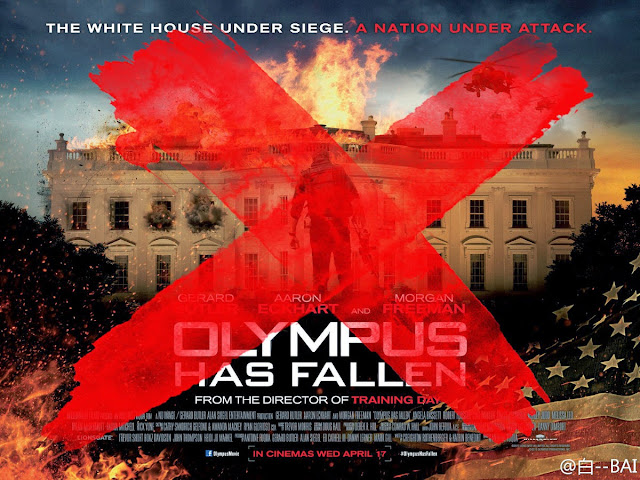 Not for it’s graphic terrorist attack on Washington, bloody and uncompromising as it is; but for the dire poverty of script and ideas in this cynical money-making behemoth which plunders the worst excesses of Die Hard and Under Seige.

You know you’re in trouble when the PR people call the director ‘visionary.’ Especially when the ‘visionary’ is Antoine Fuqua (King Arthur, Training Day), a blind man who couldn’t direct traffic.

Note to Hollywood: can we all just stop remaking Die Hard. It’s bad enough Bruce Willis remakes it every few years, bigger, louder and stupider than the last. Under Siege was Die Hard on a Ship; Passenger 57, Die Hard on a Plane. Executive Decision; Die Hard on Another Plane.

Olympus Has Fallen even dares to quote “Die Hard in the White house” on its posters.

Butler’s testosterone-pumped Secret Service Agent gets chucked off the Presidential detail for letting the First Lady die in a car crash, so he’s on a one-man mission of redemption for the rest of the movie, which involves shooting and stabbing as many foreigners in the head as possible.

If 80’s action flicks from Sly, Arnie, Dolph and Jean-Clod were gratuitously crass and comic-book dumb, they are like Antiques Roadshow next to this.

The trouble with this Nearly-Die-Hard-17 is not the ludicrous body count in the hundreds; it’s the cranked-up-to-11 plot.

North Korea provides the villains of the decade, with Rick Yune (Die Another Day) squatting in the White House bunker like a cut-price Dr Evil.

Fine actors such as Robert Foster and Morgan Freeman (Shawshank, Oblivion) look all at sea. Freeman doesn’t need to act despairing, he just has to think about the script.

Aaron Eckhardt is supposed to be a better class of president, but his noble spirit of sacrifice is undercut by the fact he is just too queasy to look at.

The predictable script shadows Die Hard and Under Siege almost to the page numbers with Butler growling his lines lower and lower with every scene; soon only tectonic plates will feel him rumbling.

If you want a decent White House thriller, look no further than Eastwood and Malkovich in Wolfgang Petersen’s In the Line of Fire.

Move along, folks. Nothing to see here. RC

Robin Catling gained degrees in both arts and technology which led to a diverse portfolio of employment. A freelance systems analyst, project manager and business change manager for the likes of American Express, British Airways and IBM, he moved on to web design, journalism and technical authoring. He has also worked in film and television, both behind and in front of the camera, including productions by Steven Spielberg, Martin Scorcese, Ron Howard and Ridley Scott. A qualified three-weapon coach, he runs West Devon Swords teaching sports fencing to all age groups, and in recent years qualified with the British Federation of Historical Swordplay to teach medieval and renaissance combat in the Historical Western Martial Arts.
View all posts by Robin Catling »
« How-to: Personal Impact
Review: Dracula Untold (2014) »