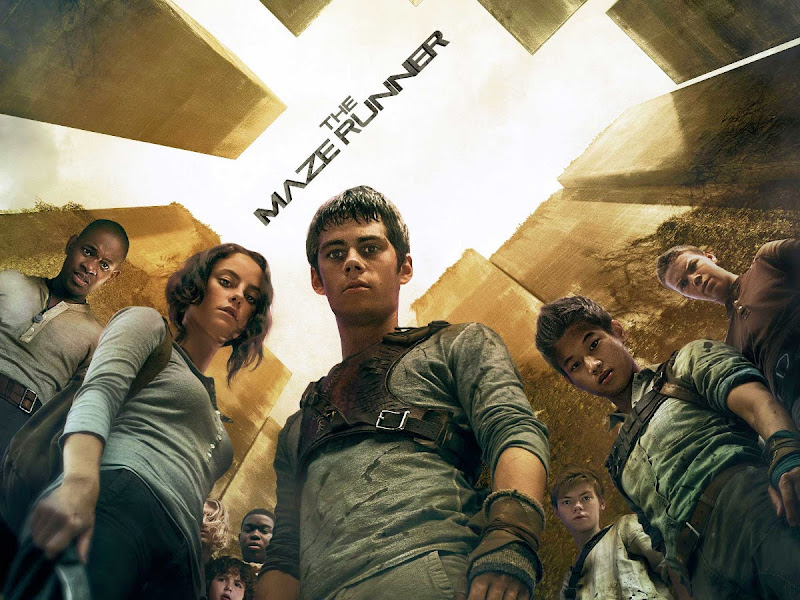 Impressive visuals can’t hide the lack of originality behind this “Hunger Games meets Lord of the Flies” franchise opener. And with the long shadow of Lost cast front and centre, you know you can’t trust a thing that anyone says or does from start to finish.

Just as well The Maze Runner‘s Lost Boys are fine young performers to make this CGI-laden behemoth bearable; with Brits Will Poulter and Thomas Brodie-Sangster a cut above.

Emerging lost and terrified from a supply elevator, supposedly 16-year-old Thomas (Dylan O’Brien) has no memory bar his name of who he is or where he came from – but the thirty or so Lost Boys of The Glade quickly fill him in; they are at the centre of a massive, industrial maze which shifts nightly; no one trapped there after dark survives the Grievers. This is clearly some twisted adult’s idea of a science experiment, but to what end?

Some of the boys have made the best of it under the benign rule of Alby (Aml Ameen), while the elite Maze Runners attempt to map the maze and find a way out. The curious Thomas breaks all the rules and attempts to join the Maze Runners as the balance of the Maze and the Glade begin to break down.

Based upon the best-selling novel by James Dashner, this is a ‘Young Adult’ concoction of desert-island self sufficiency and Boy’s Own Escape Adventure for the dystopian-fiction generation. There is a sustained sense of threat throughout, either from the truly nasty bio-mechanical spider-scorpions, the Greivers, or from the other boys; particularly Gally (a grown up Will Poulter from Dawn Treader and Son of Rambo), whose swagger conceals a terrified child.

At times The Maze Runner is properly scary, not just from the looming presence of the maze, or the first appearance of a Griever after dark (somebody took Jackspn’s LotR Shelob sequence to heart). The Glade is no safe haven, Alby’s mutual collective breaking down as Grievers begin to attack during the day; the infected are forcibly banished into the maze and the maze itself is a mechanical death-trap.

As Thomas begins to regain fragmentary memories, including the shadowy, if cheesily named W.C.K.D organisation, and begins to explore the maze he generally upsets the established order; a lone girl, Teresa (Kaya Scodelario), is dropped into the Glade to really upset things.

The Maze Runner flips uneasily between slick adult thriller and clunky teen fodder, with dialogue that clangs and grates worse than the mechanical maze at night. It has all the pre-cut components of a TV mystery-thriller series – handsome teen leads, retro sci-fi design, half-seen monsters, giant conspiracy (headed by the sinister matriarchal Ava Paige), and factional strife. It’s a big-screen Lost for the under-18’s.

Without the strong ensemble performances of the young leads, it would be just another big-budget teen block-buster. While Dylan O’Brien and Kaya Scodelario (uncannily resembling Kristen Stewart) are good, they are outshone by almost everyone else; Brits Poulter – playing an American bully boy – and Thomas Brodie-Sangster (Dr Who, Tin-Tin) are in a class of their own, closely followed by Aml Ameen as Alby, and Blake Cooper’s rotund underdog, Chuck.

Inevitably, Thomas leads an escape attempt, in which the pat Resident Evil ending isn’t an end at all, merely the opener to the next instalment. Expect improbable plot twists and turns, characters to be unmasked, certain amnesia to be false and a bigger, meaner maze for the survivors to run. RC

Robin Catling gained degrees in both arts and technology which led to a diverse portfolio of employment. A freelance systems analyst, project manager and business change manager for the likes of American Express, British Airways and IBM, he moved on to web design, journalism and technical authoring. He has also worked in film and television, both behind and in front of the camera, including productions by Steven Spielberg, Martin Scorcese, Ron Howard and Ridley Scott. A qualified three-weapon coach, he runs West Devon Swords teaching sports fencing to all age groups, and in recent years qualified with the British Federation of Historical Swordplay to teach medieval and renaissance combat in the Historical Western Martial Arts.
View all posts by Robin Catling »
« Review: Dracula Untold (2014)
How-to: Three Great Leader Traits »