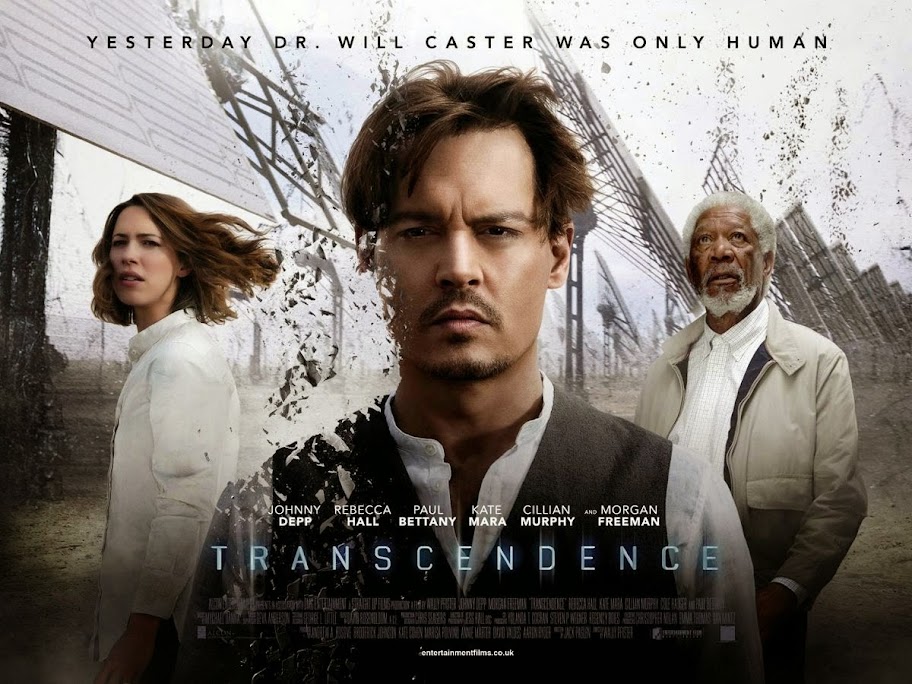 Cinematographer Wally Pfister’s directorial debut picks up where Inception left off; with a disembodied Johnny Depp given no room to mumble and shamble, it’s left to Brits Rebecca Hall and Paul Bettany to explore the moral hazards of artificial intelligence and whether it can transcend the human condition.

From here on, it’s a replay of Demon Seed and several episodes of The Twilight Zone, as Hall is convinced by Digital Depp to embark on saving the world through nano-technology, while Max loses faith, convinced the machine is a digital fake.

Is Will Castor as a machine still the same person Will Castor? With his vastly expanded mind, dramatic scientific break-throughs and, frankly, Franken-science raising of the dead, can Will Castor save the human race, or enslave it? How soon before a cyber-singularity rises to surpass the collective intelligence of the planet, and humanity goes willingly into cyber-augmentation as a cyber-sheep version of the Borg from Star Trek?

It’s a promising debut movie from a master picture-maker, beautiful and poetic with lots of close-up water droplets, desert vistas, glittering high-tech interiors (very 2001) and exterior landscapes. With Christopher Nolan and Emma Thomas as exec producers, Transcendence has a pedigree that is hard to beat.

A solid relationship drama, it plays off Hall, Depp, Bettany and suporting Nolan repertory players Morgan Freeman and Cillian Murphy in the exploration of evolution and the key question, if Will Castor is physically dead, can the digital copy be truly human?

Kate Mara (Ironclad) impresses as the fanatical luddite terrorist and you want to admit she has grounded fears… up to the point when she kills a lot of computer scientists.

The action, such as it is, is low key and never overwhelms the drama. In other hands (Michael Bay, or Brett Ratner) this would turn into another loud actioner to replay the Terminator movies. Not so here. Transcendence has the courage to stick to a script of big ideas by Jack Paglen, and for all the hokey digital glitches in Depp’s on-screen avatar (honestly, a quantum computer that holds a picture worse than my old valve-driven TV set?) it never lets the sci-fi effects run riot.

Just as well, since the technology behind Depp’s digital upload is movie-pastiche bad, the nano-technology battily whatever-we-want-it-to-be-for-the-plot and the US government response is limited to Murphy’s FBI, Freeman and three wagon-loads of mercenaries. One rather suspects the US would nuke the site from orbit (just to be sure) and fence off the smoking ruins.

Transcendence is like a hard-core sci-fi novel, putting it’s moral and philosophical arguments, lacking the emotional engagement of the Time Travellers’ Wife or In Time, or The Host. It actually has a small-scale, TV sensibility. Ironic that the man who arguably ‘made’ some of the biggest blockbusters in recent times has made something so crisp and reasonable it’s almost Scandinavian and so introspective, it’s almost a seminar.

I like it. Question is, will it be a classic in ten years’ time? RC

Robin Catling gained degrees in both arts and technology which led to a diverse portfolio of employment. A freelance systems analyst, project manager and business change manager for the likes of American Express, British Airways and IBM, he moved on to web design, journalism and technical authoring. He has also worked in film and television, both behind and in front of the camera, including productions by Steven Spielberg, Martin Scorcese, Ron Howard and Ridley Scott. A qualified three-weapon coach, he runs West Devon Swords teaching sports fencing to all age groups, and in recent years qualified with the British Federation of Historical Swordplay to teach medieval and renaissance combat in the Historical Western Martial Arts.
View all posts by Robin Catling »
« Review: Intruders (BBC America/BBC2)
Review: X-Men: Days of Future Past (2014) »