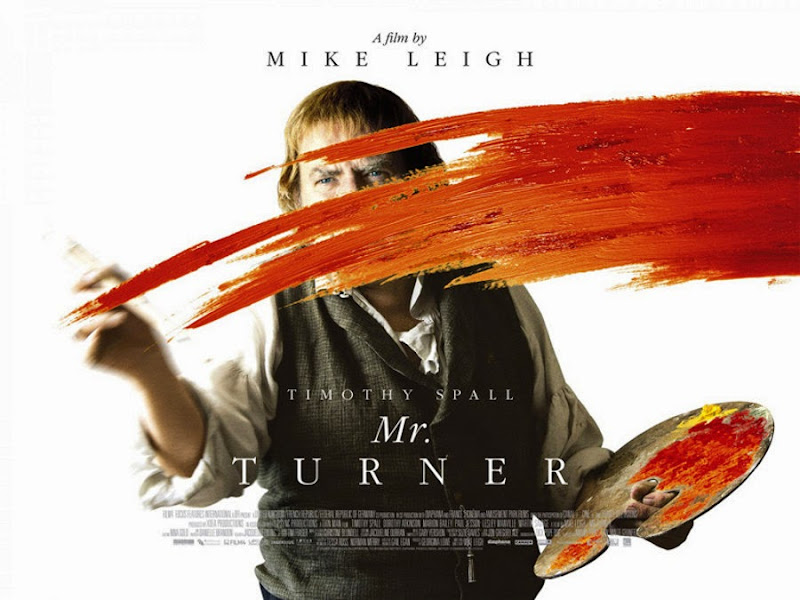 Die-hard socialist director Mike Leigh returns to Victoriana with this handsome and unconventional biopic of seascape painter J.M.W. Turner; don’t be fooled by the top hats and posh frocks, the old leftie uses his artistic Man of the People to attack the establishment as always…

Focusing on the latter part of Turner’s life, Tim Spall is a monumental, shuffling, shambling, porcine gargoyle, who expresses more in his many grunts than most actors can speak in a lifetime of dialogue. Warm, touching, tragic, and highly comic, Leigh’s collected tableaux of Turner’s life is the movie highlight of 2014.

Winding back from 1999’s superb Gilbert and Sullivan movie Topsy-Turvey, Leigh picks up in the middle of Turner’s career. Already The Great Artist, accepted into the Royal Academy and feted by society, we see Turner on his sketching travels, returning to a chaotic household.

Leigh depicts Turner as the eccentric, erratic and contradictory bohemian artist; he’s long abandoned his family, living with his retired father and besotted housekeeper; he sketches Britain and Europe, returing to his studio to paint and along the way picks up a kindly seaside landlady as his common-law wife.

While Tim Spall grunts and grumbles as the working-class lad made good, Leigh uses him to attack feckless aristocrats, the pretentious middle-class bourgeoisie, the cliquey, competitive London art world of the RA, the capitalist captains of industry; even Victoria and Albert are pilloried as dilettante art critics. Leigh pointedly gives us the stark contrast of Victorian England – the splendour of country houses and the Academy set against the everyday squalor and disease of the common people.

Turner is keenly aware of the coming modern world; despite being the art radical, foreshadowing the impressionists with his unique style, Turner the man is also a product of a bygone age, his beloved wooden ships giving way to iron and steam. And while he embraces modernity – science, the railways, steamships – he knows his world is changing. The invention of photography both delights and horrifies him. One of the many heart-breaking moments comes when his works are downgraded at the RA in favour of a (particularly bad) selection of early Pre-Raphaelite paintings.

Ever the outsider, the non-conformist Turner plays fast and loose with his identity; denying he ever had children, travelling as Mr Mallard, living as Mr Booth with his mistress.

Mr Turner is also laugh out loud funny; Spall turning his many grunts into comic punchlines and put-downs. Indeed, Spall grumbles, sobs, and laughs with noises that seem impossible from a human voice.

Mr Turner is soaked in period detail, all marvellously captured by cinematographer Dick Pope. Everywhere you look are fantastic period faces, from the leads through to the background artists.

A shuffling, langorous film, the running time never drags. Half a lifetime with these characters is too short. RC

Robin Catling gained degrees in both arts and technology which led to a diverse portfolio of employment. A freelance systems analyst, project manager and business change manager for the likes of American Express, British Airways and IBM, he moved on to web design, journalism and technical authoring. He has also worked in film and television, both behind and in front of the camera, including productions by Steven Spielberg, Martin Scorcese, Ron Howard and Ridley Scott. A qualified three-weapon coach, he runs West Devon Swords teaching sports fencing to all age groups, and in recent years qualified with the British Federation of Historical Swordplay to teach medieval and renaissance combat in the Historical Western Martial Arts.
View all posts by Robin Catling »
« Review: Prisoners (2013)
Review: Divergent (2014) »