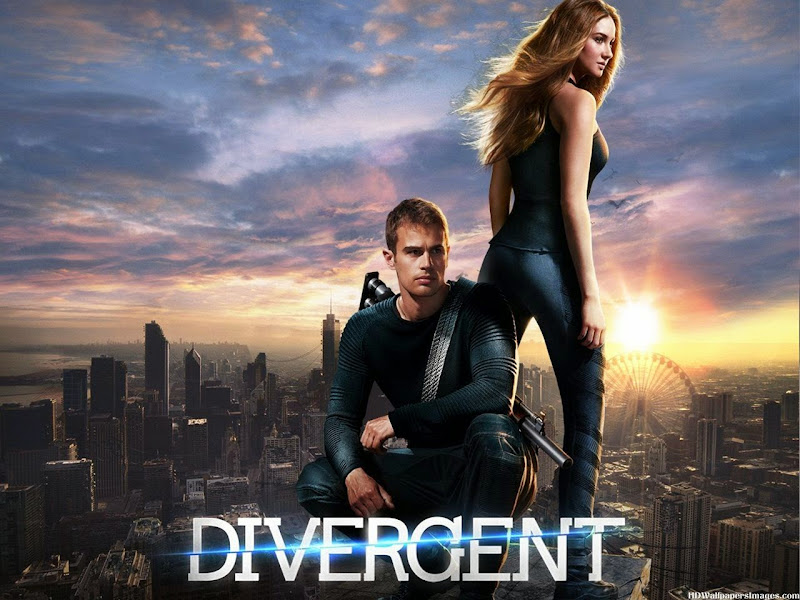 The Hunger Games riffing on The Host does Spartacus, in a manufactured, derivative and cliched distopian resistance tale. A factional (caste) society falls apart so that pretty twenty-something actors pretending to be teenagers can ride to the rescue; and ‘find themselves’ in the process.

The caste system in a futuristic, post-civil war Chicago is amusing for about five minutes, which is precisely how long it would last as a system of government. But the risky selection of faction over family is the basis of all Beatrice Prior’s tests and training, at the end of which – don’t you know it; she is The One. There’s always One.

Beatrice abandons her birth caste ‘Abnegation’ (more cool pseudo-codswallop-naming a la Maze Runner) to go to ‘Dauntless’, the reckless, whooping, free-running warrior caste. Shailene Woodley (The Fault in Our Stars) as ‘Tris’ is an bland leading lady; a cutprice J-Law, twinned with Hayden Panetierre (Heroes), but lacking precisely the gutsy spark of a Saiorse Ronan (The Host).  She fails to convince as a daredevil

Beginning as a mousey, introvert teen, of course she chooses Dauntless with their brain-numbingly stupid stunts – climbing the subway pylons, jumping the subway trains; how many kids have killed themselves trying to emulate this garbage so far?

Divergent is the usual Harry Potter, Enders Game trials of the misfit non-conformist fighting against all odds to become a fearless resistance leader. Thanks to Tris’ remarkable multi-functional, divergent brain, she wins the Dauntless wargames. There’s brainwashing, a military insurrection, and a conspiracy of intellectuals and scientists to seize power. For the young ladies, Theo James smoulders as leading man ‘Four’ – really, is that the best you could come up with, Ms. Roth? Twenty-six if he’s a day, Four also has his secrets, like R-Patts in Twilight.

Based on Veronika Roth’s under-graduate teen adventure novels, this is another studio hunt for a billion-dollar franchise. Director Neil Burger (Limitless) makes the best of a truncated script from  screenwriters Evan Daugherty and Vanessa Taylor but doesn’t have distinctive source material.

Naturally, we have to have a pantomime villain, and in these elightened feminist times, it’s the corporate executive of Erudite Faction (Oscar-winner Kate Winslet), who has broken through the glass ceiling only to become a fascist dictator by military and scientific coup. Winslet does her best to be chilly and insufferably self-righteous, but underplays so deeply she fails to make the grade as a Bond villain in her gleaming hi-tech den. Who’d have thought we’d be wishing for a Diane Kruger performance?

As social commentary, nobody comes out of this very well. The selfless Abnegation caste is put down as “stiff’s.” Nobody trusts the over-educated, supercilious Erudites while the Dauntless leadership is filled with sadistic, meat-headed jocks.

Divergent tries to be desperately earnest, but the underground fight-camp, Matrix-style training simulations and oceans of faultless but vaguely uninspiring CGI landscapes fail to make a mark. The final act is so much by-the-numbers Tomorrow People tedium you’re glad of it’s trite non-climax, even though it’s just the set-up for episode two.

Rather than this cynical and empty-headed adolescent marketing exercise, just see The Host instead. RC

Robin Catling gained degrees in both arts and technology which led to a diverse portfolio of employment. A freelance systems analyst, project manager and business change manager for the likes of American Express, British Airways and IBM, he moved on to web design, journalism and technical authoring. He has also worked in film and television, both behind and in front of the camera, including productions by Steven Spielberg, Martin Scorcese, Ron Howard and Ridley Scott. A qualified three-weapon coach, he runs West Devon Swords teaching sports fencing to all age groups, and in recent years qualified with the British Federation of Historical Swordplay to teach medieval and renaissance combat in the Historical Western Martial Arts.
View all posts by Robin Catling »
« Review: Mr Turner (2014)
How-to: Handle Windows 10 Technical Preview »