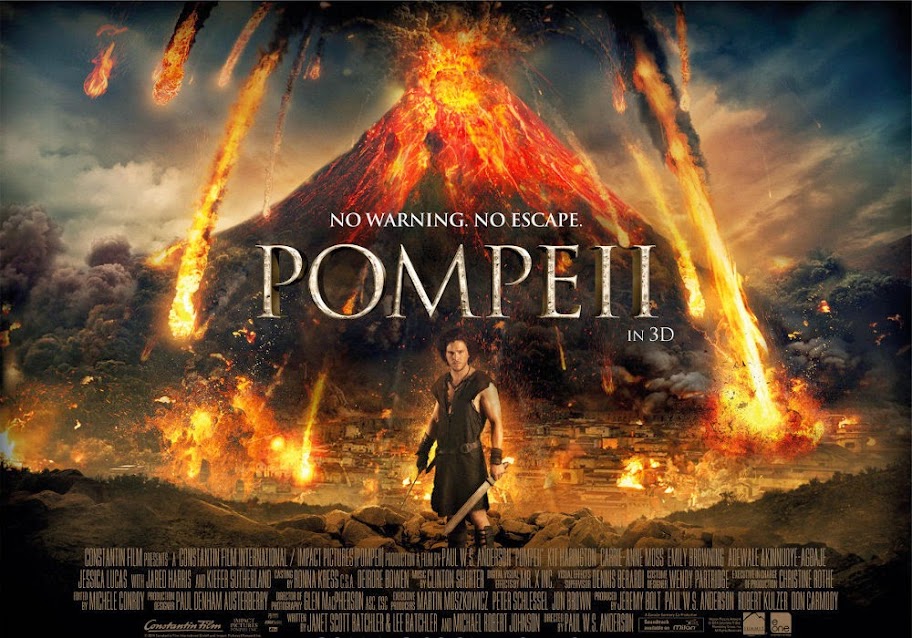 Ever imagined the Gladiator redone by Roland Emmerich with Dante’s Peak on the side? Now you don’t have to as Paul W. S. Anderson (Event Horizon, Death Race and too many Resident Evil‘s) has made Pompeii.

Kit Harington (Game of Thrones) smoulders darkly and flexes his biceps from Celtic Britain to the Roman resort of Pompeii, where corrupt Senator Corvus (Keifer Sutherland – 24) pitches up to snatch provincial damsel in distress Emily Browning.

But yes, do you know how it’s going to end. Mostly…

When mass-murderer of the Celts Sutherland arrives with Rome’s champion Proculus (Sasha Roiz), Milo’s chances of revenge look slim when he and Atticus are placed in a reconstruction of the taking of Carthage – oops, wrong movie – the subjugation of the Celts. And what do you know, they defeat the ‘Roman’ faction in the arena. But before their summary execution, old Vesuvius blows it’s top. Cue daring rescues and revenge, earthquake, lava bombs, tsunami, fire, flood, mud and destruction as good as anything Emmerich, Irwin Allen, or Cecil B. De Mille could produce. With extra eye-popping CGI 3-D.

There’s even a ridiculous chariot chase through the collapsing streets with said damsel in distress handcuffed to the rail.

While Harington and Browning aquit themselves well, Jared Harris (Sherlock Holmes Game of Shadows) gets to play a bourgeoise provincial property developer, for once not an outright villain; and Carrie Ann Moss (The Matrix) is now an underused Roman matriarch.

I came to this with some trepidation; even Kurbick’s Spartacus, the grand-daddy of all gladiator movies, had a certain joyous campiness about it, whilst on Stars Network, the Spartacus TV show is a camp cartoon flesh-fest of boobs, bums and biceps.

Pompeii is oh-so tastefully done, with a restrained amount of ketchup, and everyone keeps their togas on. But sure enough, there’s a thread of camp in Pompeii from an unexpected source.

If you didn’t think Kiefer Sutherland could do camp, watch him replay the Laurence Olivier performance from Spartacus; in fact, most of the time he seems to think he’s in Frankie Howerd’s Up Pompeii; he’s so camp at the beginning, with an odd lisping nasal delivery, smirking, sneering and looking down his strange nose (has it always been that shape?) at everyone.

He is, of course, the perfect embodiment of our modern idea of the corrupt, arrogant, decadent aristocrats of imperial Rome and a fitting foil for Milo.

After a rollicking, action-packed, incident-filled adventure with few pretensions to anything else, you may well find the ending a disappointment. But you knew, with that enormous smoking volcano in every wide shot, how this would end, even if you didn’t know Pompeii’s story. It’s all about the energetic, if workman-like journey. It may not have the depth of either Centurion or The Eagle, but the sword-and-sandals tradition goes on. RC

Robin Catling gained degrees in both arts and technology which led to a diverse portfolio of employment. A freelance systems analyst, project manager and business change manager for the likes of American Express, British Airways and IBM, he moved on to web design, journalism and technical authoring. He has also worked in film and television, both behind and in front of the camera, including productions by Steven Spielberg, Martin Scorcese, Ron Howard and Ridley Scott. A qualified three-weapon coach, he runs West Devon Swords teaching sports fencing to all age groups, and in recent years qualified with the British Federation of Historical Swordplay to teach medieval and renaissance combat in the Historical Western Martial Arts.
View all posts by Robin Catling »
« How-to install Windows 10 Technical Preview in VirtualBox Pt 2
How-to: Help! My IP address has been hacked! »