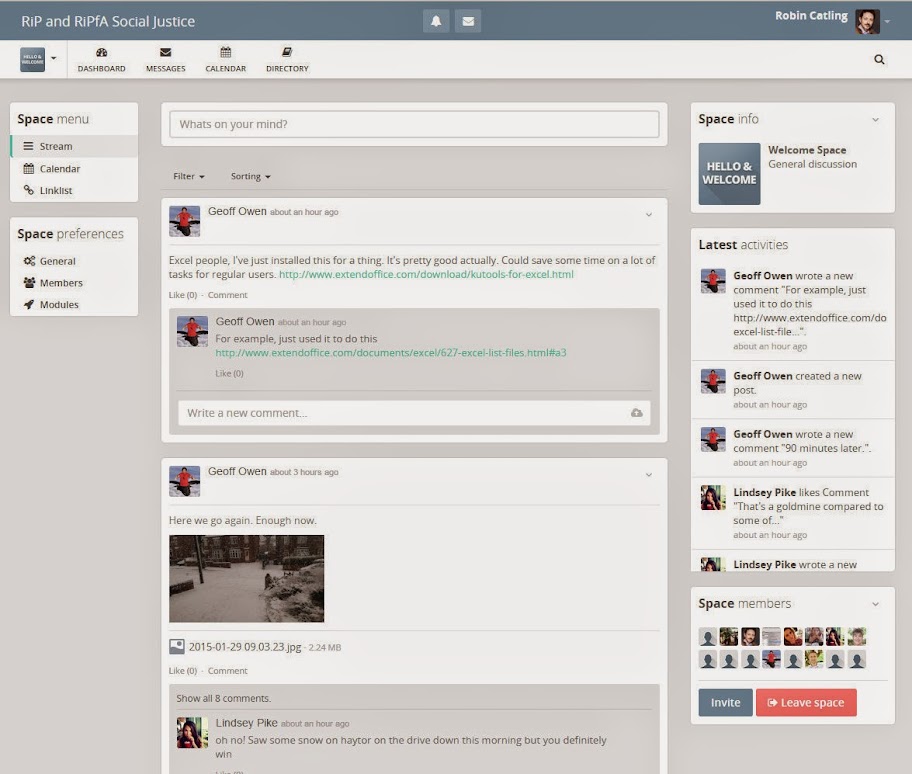 “HumHub is a free social network software and framework built to give you the tools to make teamwork easy and successful.

It’s lightweight, powerful and comes with an user-friendly interface. With HumHub you can create your own customized social network, social intranet or huge social enterprise application that really fits your needs.”

When we lapsed our Saleforce licences, the Chatter facility went, too. What we needed was an IM replacement for internal use. Very few fitted our constraints.

From a very, very short short-list, we chose HumHub, a flexible open source social network application written in PHP using the Yii Framework. There is a TRY DEMO button right on the smart-looking and very corporate homepage which will give you a 3-user, 500MB sandbox to play in, which is where I started. The demo was a little limited but promising, so we used the Get on GitHub button, downloaded the code and installed it on our server.

Currently on Version 0.10.0, you won’t want to deploy this for mission-critical use, such as your call centre. That said, ours has been very stable so far with 100% uptime.

You’ll want to read the instructions at https://github.com/humhub/humhub/blob/master/protected/docs/guide/administration/index.md before you do that. Installation was straightforward, bar a couple of minor glitches; check library dependencies for your particular server pre- and post-install and double-check your scheduled CRON jobs for Notifications, as ours failed to run the first time of asking.

If you don’t know what that lot means, you have some reading on Open Source web servers to do before you even try to install anything.

Feature Set
Think of HumHub as a cut-down IM/chat facility somewhere between Facebook, PHPBB and an IM client. It is nice and lightweight and easy to understand if you know how those two work.

Thanks to the Yii framework it should be Mobile-responsive – haven’t tried that yet, that’s for another review.

The touted “powerful module system” takes various plugins. At the moment these all seem to be on the HumHub ‘Marketplace’ (because AppStore is copyright some fruit-based company) and we’ve plugged in a stack of modules for News, Calendar, Mail and Link List. Custom Pages will be next on our evaluation.

Theming – built with Twitter Bootstrap 3 as a front-end framework, you should be able to re-skin it in your own livery. We’ve left in the default theme for now.

Development
As far as I can tell, HumHub consists of two developers, Andreas and Luke, conciencious and polite chaps building this thing part-time beside other jobs. Response time varies; they responded to a bug report on IE11 and updated the code within a couple of days, other non-urgent questions seem to have got lost in the mail stack.

In use
After only a couple of weeks, it’s going well. It fills the gap left by Chatter and there’s a core of the team using it regularly, although this was a soft launch at a busy time of year. The downside is that you need it open in a browser all the time in order to see what’s occurring.

Users create their own accounts which are approved by Admin in the Administration panel – which is simple, logical and not scary.

I built the user guide in a How-to space, using just the facilities available in the software. I could do with a light-touch HTML editor, just to do bold, italic, underline and colours. It will take uploaded images inline, but only at the bottom of the post. HumHub recognises inline URL’s as live links so you don’t have to format those.

We found a minor issue with updating profile pictures in IE10 (but only IE10!?). We’ve not had a response to that yet.

Search will scan the space names and user names, it doesn’t currently search the content of posts within spaces, but I’m guessing you could add that if you know how to use plugins in Yii.

Verdict
It is filling the requirement for IM and general discussion, with a UI that is uncluttered and easy to use. I can’t say we’ve really stretched it yet, but so far HumHub has a really promising start. We wait to see where Luke and Andy take it next. RC

Robin Catling gained degrees in both arts and technology which led to a diverse portfolio of employment. A freelance systems analyst, project manager and business change manager for the likes of American Express, British Airways and IBM, he moved on to web design, journalism and technical authoring. He has also worked in film and television, both behind and in front of the camera, including productions by Steven Spielberg, Martin Scorcese, Ron Howard and Ridley Scott. A qualified three-weapon coach, he runs West Devon Swords teaching sports fencing to all age groups, and in recent years qualified with the British Federation of Historical Swordplay to teach medieval and renaissance combat in the Historical Western Martial Arts.
View all posts by Robin Catling »
« How-to: Understand GSM and CDMA (phones)
How-to: Three tips for the best man’s speech »