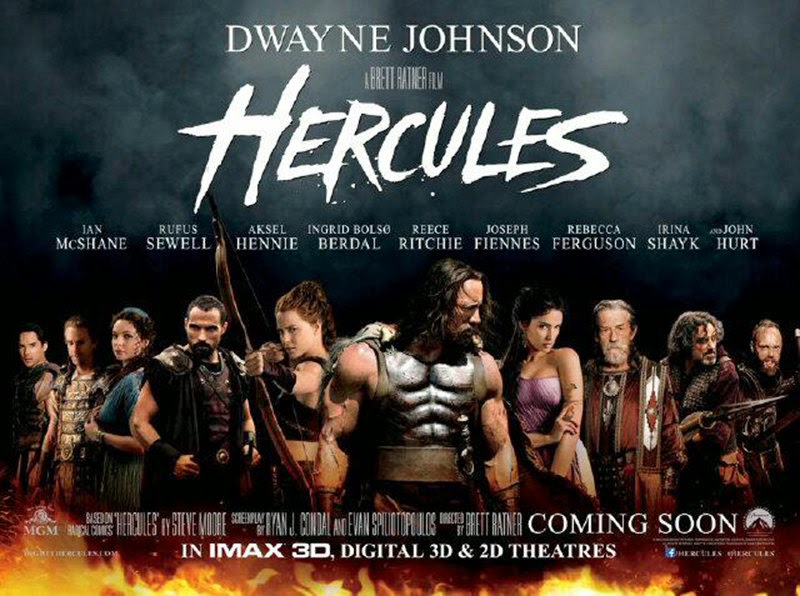 De-bunking the Hercules myth and rebuilding it as a sword-and-sandals Magnificent Seven (count ’em at the end), Big Action director Brett Ratner builds big stupid fun with plenty of hacking and slaying around Dwayne ‘the Rock’ Johnson.

The cheeky script from Radical Comics’ revisionist Hercules leaves no cliche untouched in this CGI-laden romp, but it’s the best of British – Sewell, Hurt, Fiennes, Mullen and McShane – who steer it home.
Johnson is the muscle-bound mercenary whose legendary labours as the Son of Zeus go before him – woven into tall tales by his wimpy young nephew Iolaus (Reece Ritchie). But his invincibility is really down to the team work of his warrior band, who put in some fine work to keep this rollicking classical action-fest on track.

Fortunately there are actors who can do dialog and a good one-liner; Rufus Sewell (A Knight’s Tale, Mark of Zorro) is the cynical right-hand man Autolycus; Ian McShane (Snow White & The Huntsman, Jack the Giant Slayer) the veteran seer Amphiarus.

Kings get short shrift in this; you just know the smooth Athenian King Eurystheus (Joseph Fiennes) can’t be trusted, while John Hurt joins from the classier Immortals and Dr Who as the seemingly frail Thracian king Cotys. Peter Mullen (Harry Potter) joins in the British parade of sinister as the Thracian general.

After battling pirates (led by Chris Fairbanks – Fifth Element), Hercules is called to defend Thrace against a usurper, Rhesis. Training a peasant army that goes to war before it’s ready, Team Hercules has to complete their training before the final clash, treachery and betrayal. The final act is the turnabout, when mercenaries become men of honour, make the last stand, it’s all about family and saving the boy-king of Thrace.

Amid the big action set-pieces, mass battles worthy of Immortals and Troy, there’s plenty of classical myths de-bunked along the way. McShane’s visions are seldom true; we work through the Hydra, Cerberus, Centaurs, even the Nemean Lion (in the end credits).

Returning to the genre ten years after the equally brash Scorpion King, The Rock (Doom, Fast and Furious 23) carries the movie with his well-practiced, crowd-pleasing charm and wrestlers’ physique, and is one of the few screen muscle-men turned actor with the larger-than-life personality to suit the role. With just enough acting chops to carry off the paper-thin, tragic back-story, Johnson is never better than flexing his muscles and throwing the stuntmen around like rag dolls. And he doesn’t once do his ‘eye-brow thing.’

Like the slightly po-faced Immortals and the lesser, ridiculous, 300 movies, this Hercules is drenched in graphic violence, with only token blood. The inventive body count is astronomical, and that’s before we even get to the chariot-mounted blades. The flippant humour sometimes sits uneasily with this much bludgeoning, impaling and beheading. There’s a sprinkling of profanity, and, apart from leering at Atalanta’s battle-bondage shorts, no romance at all. No one ever accused Brett Ratner (Rush Hour, X-men The Last Stand) of being subtle or a pansy, or indeed, anything but a director for teenage boys.

However, Hercules is that rare thing these days, a pop-corn epic that doesn’t play like someone else’s video game. A bit of mythical revisionism aside, it may not be very original either, pompously defying fate and espousing self-reliance, self-belief – but for the absence of the Stars and Stripes and any kind of sub-text (it’s all surface), this might as well be an American WWII propaganda movie.

If you’re willing not to be offended by it, Hercules serves up exactly what it promises at the start; big stupid fun with plenty of hacking and slaying, and Dwayne ‘the Rock’ Johnson. RC

Robin Catling gained degrees in both arts and technology which led to a diverse portfolio of employment. A freelance systems analyst, project manager and business change manager for the likes of American Express, British Airways and IBM, he moved on to web design, journalism and technical authoring. He has also worked in film and television, both behind and in front of the camera, including productions by Steven Spielberg, Martin Scorcese, Ron Howard and Ridley Scott. A qualified three-weapon coach, he runs West Devon Swords teaching sports fencing to all age groups, and in recent years qualified with the British Federation of Historical Swordplay to teach medieval and renaissance combat in the Historical Western Martial Arts.
View all posts by Robin Catling »
« Movie Catch-up: The Hangover (2009)
How-to: Rehearse the Team Pitch »