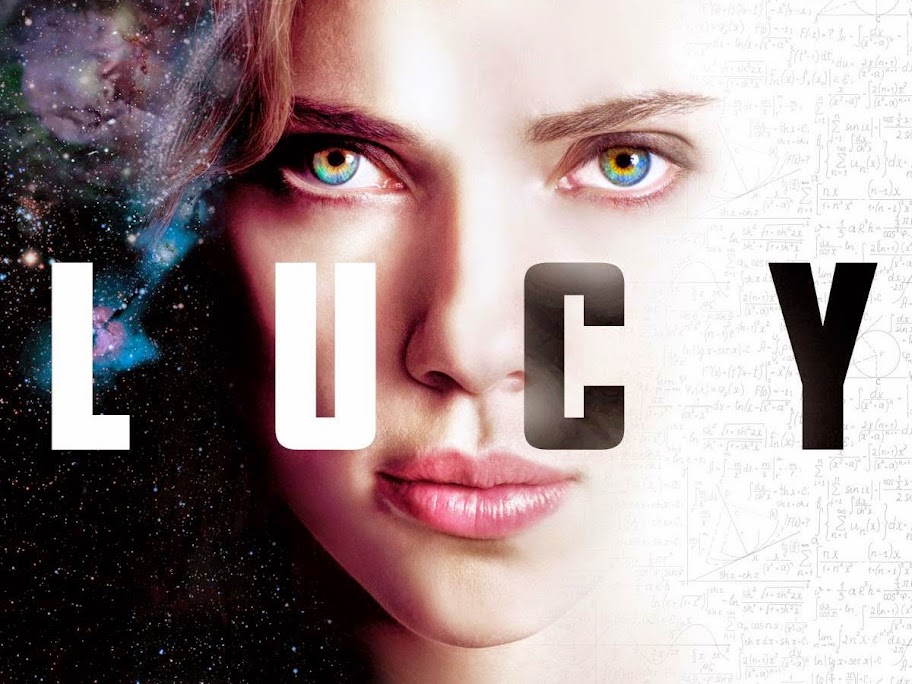 The science may be specious, but the action is frenetic and stylised. In typical Besson style of throwing everything at the screen to see what sticks, there’s action, there’s pathos, philosophy and an art-house score from Eric Serra.

As Scarlett Johanssen (Avengers, Her) becomes the first lady of sci-fi, here she is Lucy, the ex-pat Philly girl in Taiwan, set up as a courier by her sleazy boyfriend; immediately he’s dead and she’s been turned into a drug mule by vicious Chinese gangsters. Beaten by her jailors, the drugs leak into her system, and a massive dose of synthetic CPH4 begins to turn her into…

Meanwhile, Professor Basil Exposition, sorry, Professor Norman, (Morgan Freeman, Oblivion, Shawshank) delivers a scientifically fallacious lecture on how humans only use 10% of their brain capacity and the superpowers that could be unlocked if the other 90% were available.

Awakening from an Exorcist/Trainspotting overdose with those very superpowers, Lucy aims for revenge against godfather Mr Jang, but as her brain capacity rises announced by a bizarre set of percentage flash cards, she also seems to be working toward a higher purpose.

Lucy is frankly daft from start to finish. No sooner we get to know Lucy than she begins her transformation into an invincible super-being more clinical and more detached than Dr Manhattan in Watchmen, somewhere between the Mekon and the Terminator.

Gaining a set of superpowers that defy any kind of logic, most having nothing to do with brain capacity, this is less Limitless and more a teenage comic-book-fantasy trip combined with Carrie.

There are violent shoot-outs, carnage aplenty in car chases on the streets of Paris and a finale that is only slightly less trippy than that of 2001 and equally ‘deus ex machina’ (Greek drama – look it up) as Transcendence.

Which would be fine but for two things; first, I’ve never felt Johanssen to be a particularly deep actor, her pouty, husky, just-got-out-of-bed delivery notwithstanding. Second, she’s badly served by Besson’s script. Her first jump in brain power to the magic 20% threshold, completely transforms her to fully-formed superwoman. Even with a couple of episodes of kindness – a phone call home and the medical diagnosis of her ditzy model flatmate – Lucy slips into a god-like state of detachment inside fifteen minutes and stays there. It took The Lawnmower Man nearly two hours.

Lucy tries to tackle big questions; what makes us human, how much potential do we have, could we one day become super-human? Unfortunately Besson swamps that contemplative, philosophical sci-fi movie with the action-thriller mechanics of Taxi and Leon.

We ride the Besson Express, blasting along like a bullet-train from Tai-wan to Paris. Lucy, doomed in 24 hours like the lead in D.O.A., pursues the remainder of the drug shipment, enough to prolong her life to achieve a 100% brain and a state of transcendance (small T).

Besson directs his unsubtle script with unsubtle Gallic flair. In a bravura final sequence, Lucy achieves an altered state of being that allows time travel, mind over matter and quantum transmutation.

Technically, Lucy is a tour-de-force, as Besson might say. slick editing covers some laughable, fast-cut PowerPoint slides in Act One. Lucy’s superpowers are expressed through some faultess CGI, almost in a dream state worthy of Inception. The final time travel sequence takes in the building of New York, a Michaelanglo finger-touch moment with the pre-historic Lucy hominid, the formation of the Earth, the galaxy and the universe back to the big bang.

If Lucy is ultimately derivative and flawed, it presents itself with Besson’s usual style and brio and doesn’t outstay its’ brisk 89-minute welcome. RC

Robin Catling gained degrees in both arts and technology which led to a diverse portfolio of employment. A freelance systems analyst, project manager and business change manager for the likes of American Express, British Airways and IBM, he moved on to web design, journalism and technical authoring. He has also worked in film and television, both behind and in front of the camera, including productions by Steven Spielberg, Martin Scorcese, Ron Howard and Ridley Scott. A qualified three-weapon coach, he runs West Devon Swords teaching sports fencing to all age groups, and in recent years qualified with the British Federation of Historical Swordplay to teach medieval and renaissance combat in the Historical Western Martial Arts.
View all posts by Robin Catling »
« Review: Alexandra Stan – Unlocked (2014)
How-to: Understand GSM and CDMA (phones) II »