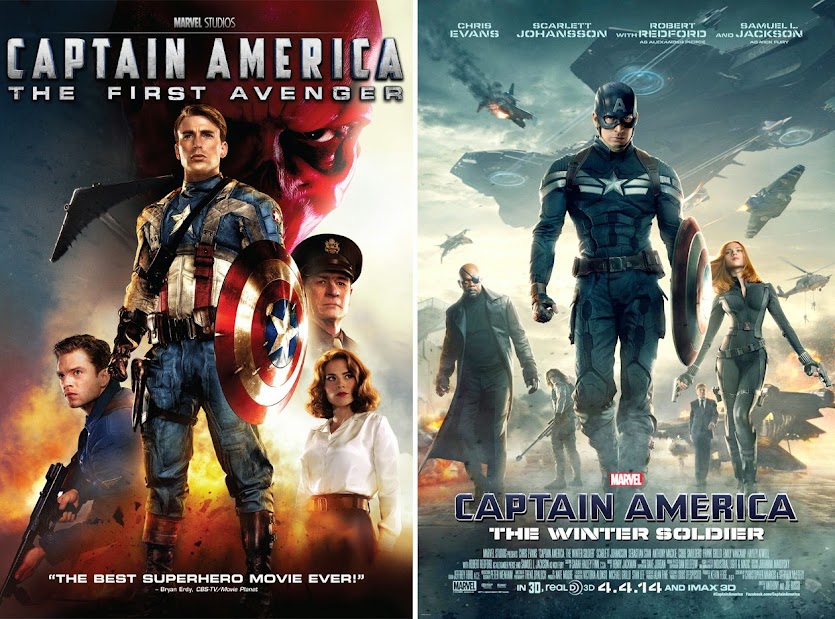 Re-inventing, then re-re-inventing the comic-book hero from WWII saviour to man-out-of-time in the present day, the two Captain Americas are as different from each other in tone and style as chalk and cheese.

But while Captain America pulls off the all-American, White Hat hero with spotless morals, there’s an oddly asexual, homo-erotic theme in both movies – and not just in the amount of leather bondage-wear sported by both casts.

Impressive action sequences can’t disguise these boy’s own fantasies as anything more than comic-book wet-dreams with extraordinary budgets.

The First Avenger (director Joe Johnston) is bold, brash and slightly camp; Hugo Weaving (The Hobbit, The Matrix) does that sneering thing he does for his villains, Toby Jones is shifty and slight; the pair of them sporting comedy ‘Allo ‘Allo German accents as The Red Skull and Dr. Zola. The retro-futurist WWII is Flash Gordon with better gadgets. Haley Atwell does an admirable cut-glass British heroine, Tommy Lee Jones your typical American general after Patton. Dominic Cooper imitates Robert Downey Jnr as Howard Stark; but Stanley Tucci’s (Jack The Giant Slayer) mild mannered scientist is the moral heart of the movie, and the light dims when he bows out early.

As an origins movie, it is a cut above the usual perfunctory superhero fare; the puny Steve Rogers seamlessly CGI’d down to a 95lb weakling so that Evans can spring forth as a latterday Hercules. Or perhaps Achilles, since he prefers to hang out with his army unit instead of Attwell’s Agent Carter or Natalie Dormer vamping as a ’40’s Veronica Lake-alike – and both of them panting and ‘up for it’ as Johnny Depp says in The Libertine.

Yes there’s spectacle and plenty of stuff blowing up, but it remains a neon-lit romp, from Frankenstein’s laboratory start, to spectacular flying-sequence finish, full of flag-wrapped post-911 brutality.

The Winter Soldier (directors Jay and Antony Russo) turns dark and political, overlaying current concerns about espionage, terrorism, and the price of freedom, even importing veteran actor Robert Redford to spout the positive benefits of ordered tyranny over chaos. It’s at the upper end of the production line that countless TV shows are churning out (Marvel’s Agents of SHIELD included).

The Winter Soldier ramps up the action to a new level, with action set-pieces that escape SHIELD’s modernist HQ for huge car chases; running street battles bigger, louder and faster than Mission Impossible, Bourne, and Die Hard 4 put together. Especially impressive are the hand-to-hand combats, of which there are many. Suspect the new generation of martial arts movies such as The Raid had a particular influence.

With plenty of hardware on display, it takes no less than three of Marvel’s trademark flying aircraft carriers to produce levels of carnage and destruction not seen since Thor and Guardians of the Galaxy. Marvel Studios is firmly in an arms race with itself and rival action blockbusters such as Man of Steel.

A pumped up Chris Evans as the titular hero leaps and bounds vigorously through both movies, straight-laced and serious, whiter-than-white with the kind of bottomless integrity not seen since Gary Cooper. Evans’ easy (or bland) charm holds the screen across both movies without becoming cloying.

But two things strike an discordant note.First, the common sub-text that makes these both impotent, pubescent teenage movies. The almost-Spartan bromance between the Captain and WWII sidekick Bucky Barnes, under-cuts the unrequited romance of Rogers and Atwell’s Agent Carter.

The sequel doesn’t get any better as Rogers is unresponsive to Johanssen’s Black Widow, who is also clearly and desperately ‘up for it’. Instead the bromances with Falcon and the unstoppable, homicidal Winter Soldier take centre stage. Combine this with Rogers’ tight white T-shirts and way over-rouged red lips and you start to think this is a closet gay franchise?

Secondly, there’s a ridiculous amount of violence and gun-play that makes your average Sly/Arnie action movie from the 90’s look tame; dressed as comic-book pantomime in the First Avenger, then raw, undisguised bone-crunching glee in the sequel.

We can expect more from the incorruptible Captain in the next Avengers movie, then a third appearance in this franchise. The question is less how to top The Winter Soldier and develop an already layered ad conflicted character without getting silly; but more will our flag-wrapped hero manage to find and keep a girl-friend? Probably not. RC

Robin Catling gained degrees in both arts and technology which led to a diverse portfolio of employment. A freelance systems analyst, project manager and business change manager for the likes of American Express, British Airways and IBM, he moved on to web design, journalism and technical authoring. He has also worked in film and television, both behind and in front of the camera, including productions by Steven Spielberg, Martin Scorcese, Ron Howard and Ridley Scott. A qualified three-weapon coach, he runs West Devon Swords teaching sports fencing to all age groups, and in recent years qualified with the British Federation of Historical Swordplay to teach medieval and renaissance combat in the Historical Western Martial Arts.
View all posts by Robin Catling »
« How-to: The Elevator Pitch – ten top tips
Review: Taken 3 (2015) »