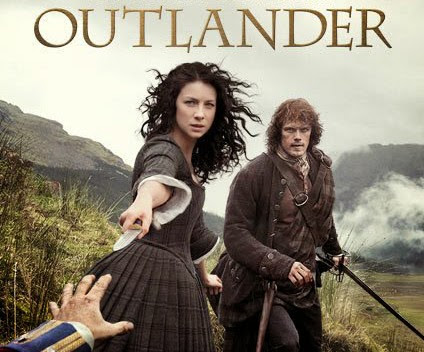 Remember that 80’s boy’s own warrior fantasy Highlander, with immortal Scot-tosh swordsman Christopher Lambert fighting down the ages to the mordern day? Now imagine that flipped around, and role-reversed so a fish-out-of-water British nurse from WWII lands in Stevenson’s Kidnapped as told from Katriona’s point of view.

Producer Ronald D. Moore brings twin-period Brigadoon Galactica to the low-rent Starz Network with this dull historical fantasy; part Alice in Wonderland, part Kidnapped, part Vikings – significantly Kilts-and-Boon. Adapted from Diana Gabaldon’s novels, a fine British cast struggles to raise the material much past Fifty Shades of Tartan.
Married World War II nurse Claire Randall (Caitriona Balfe, H+, The Beauty Inside) goes on post-war holiday to the Scottish Highlands with hubby Tobias Menzies), and through the MacGuffin of ancient stones, time travels to 1743. There she meets Jamie Fraser (Sam Heughan, First Light) and her husbands’ ancestor – a thoroughly sadistic British officer no less – and realises some very nasty events indeed are about to hit the highlands. My, my, does it feel like we’re invoking the 90’s – Braveheart, The Patriot and Rob Roy. Unfortunately they were all terrible.

Despite the basic premise of historical romance set in meticulous historical detail, it’s difficult to know where this sits. The cheesy Stars Network produced the appalling Spartacus, and Outlander imports all the elements of nudity, violence and swearing that sold to the male (teenage) demographic, probably looking for that audience gender-crossover to Game of Thrones.

Amist the high production values, lush scenery, and authentic costumes, Outlander suffers some serious mis-steps. Early episodes have little urgency in the storytelling, while the layers of voiceover (show me, don’t tell me) prove Starz writing team still isn’t up to the difficult transition from the novel. When the most exciting outing is when Claire goes out with the Scots gang to collect taxes, you know something is wrong. It lacks the smart pacing of the dense multi-threaded Game of Thrones, although if you can get to episode four and on, it picks up considerably.

The Scot accents sound authentic but unintelligible, perhaps sparing us some ripe lines; there are no subtitles on the Gaelic dialog, so we’re just as confused as Claire. The two lead actors struggle, as Claire just whines and vacillates in Balfe’s odd English-Irish accent-  and what’s going on with her expletive “Jesus H. Roosevelt Christ?” On the plus side, Jamie smoulders nicely and flexes his biceps and butt, which explains why Claire doesn’t object too much to a forced marriage and bigamy.

Filled with a cast of inexpensive TV actors, this relatively small-scale production has made it into a second series – sorry ‘season’ but alongside a growing list of ‘must see’ TV, I don’t know if I will. SC

Sue Corsten is a film and TV make-up artist based in the UK.
View all posts by Sue Corsten »
« Opinion: Goodbye Google Plus
Review: A Town Called Eureka Season one (2006) »