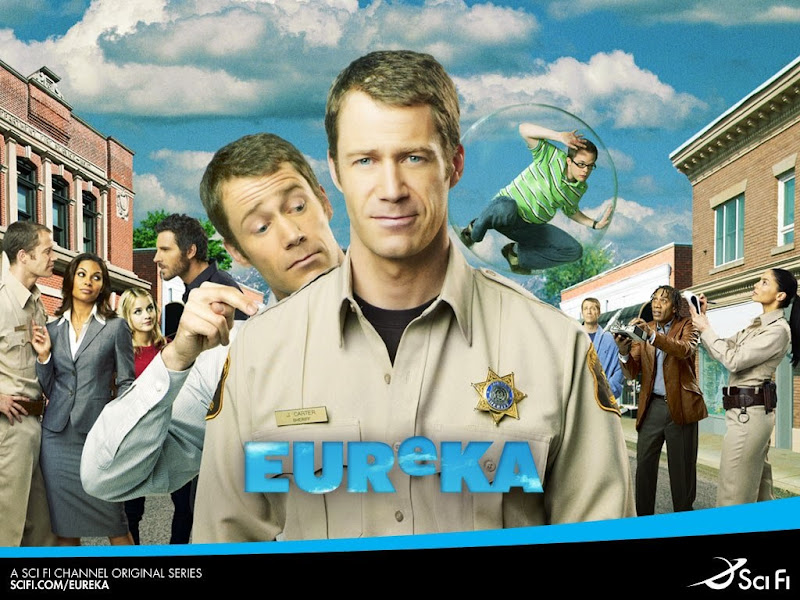 I missed Syfy Channel’s quirky TV sci-fi comedy drama the first time out, only to discover in the re-runs that is is more fi- than sci-, more wan-smile than comic and too predictable for drama. Which leaves it trading on quirky, and that just ain’t enough.

Billed as a sort of X-Files-lite (even liter than it’s TV cousin, the dismal Warehouse 13), Eureka‘s premise sees a US Marshall transferred to be sheriff of a North-West American small (i.e. Vancouver) town that covers a top-secret government research facility, Global Dynamics.

As such Eureka is flat-pack sci-fi geekery, an anything-goes episodic fanstasy show with a fish-out-of-water detective surrounded by scientists and hokey Weird Science tropes, all punctuated with a sub-Danny Elfman Desperate Housewives score.

The town is a candy-coloured Stepford–Truman Show confection full of eccentric scientists, with plenty of room for Area-51 type experiments, gizmo’s, glowing artifacts and regular count-downs to disaster. Regular.

The cast do well with the available material: Colin Ferguson (Coupling US) is a amiable Ordinary Joe, with a teenage ‘delinquent’ daughter (Jordan Hinson), there’s an awkward love triangle with the local GD liaison officer (Salli Richardson-Whitfield) and the morally dubious head of the facility (Ed Quinn); the local shrink (Debrah Farentino) is a plant and possibly a spy.

Weekly guest stars include the usual rogues gallery of familiar US TV faces from every middle-market drama or sci-fi show of the last twenty years, among them Maury Chaykin (Nero Wolf) and Saul Rubinek (I think there’s an Act of Congress which mandates his employment in every US TV series, from Star Trek TNG through Nero Wolf, to Jessie Stone and Warehouse 13).

The trouble is that the available material is so comfortably formulaic the players can’t save it. This is strictly production-line TV chasing that magic formula that makes a hit; it wants to be Lost, Fringe, or Supernatural, without any of the substance (?!) of any of those. Whilst it bounces along merrily, the science is too flip, the characters too sketchy, and the dialogue lacks any spark of originality. But then, despite the Star Gate recipe of weekly science disaster cliches – clones, radiation, wormholes, androids, escaped nano-tech – the show is really all about family; Little Lab on the Prairie. There may be threads of story arcs running through the season, but it’s too slow to go anywhere and they are hardly compelling.

Eureka is a microwavable TV dinner next to any of the shows mentioned above, which is fine if you just want to pass some time, but it doesn’t exactly rank in the lists of all-time unmissable TV. Which is probably why I missed it.  RC

Robin Catling gained degrees in both arts and technology which led to a diverse portfolio of employment. A freelance systems analyst, project manager and business change manager for the likes of American Express, British Airways and IBM, he moved on to web design, journalism and technical authoring. He has also worked in film and television, both behind and in front of the camera, including productions by Steven Spielberg, Martin Scorcese, Ron Howard and Ridley Scott. A qualified three-weapon coach, he runs West Devon Swords teaching sports fencing to all age groups, and in recent years qualified with the British Federation of Historical Swordplay to teach medieval and renaissance combat in the Historical Western Martial Arts.
View all posts by Robin Catling »
« Review: Outlander Season 1 (2014)
Review: Insurgent (2015) »