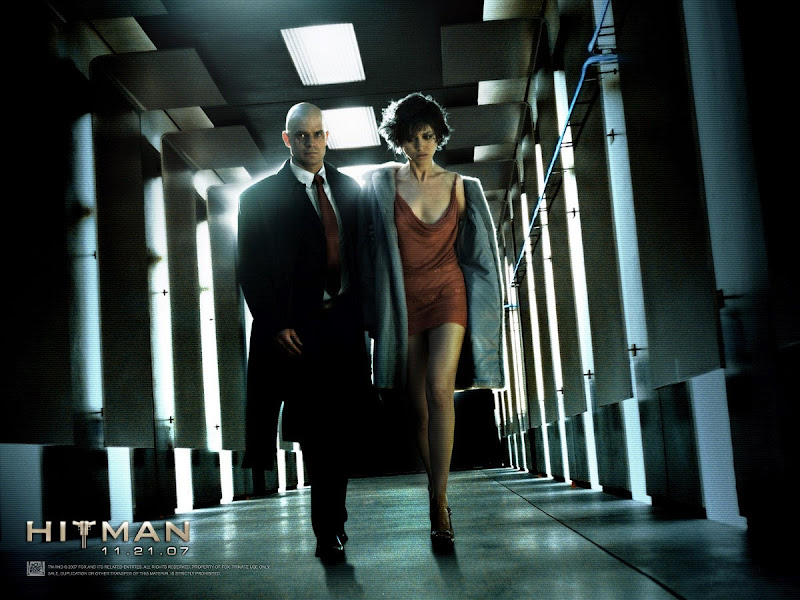 Taken as read that linear movies of interactive video game shoot-em-ups are always going to miss their mark, then Hitman takes a decent shot at big-action espionage guff, with some decent actors spouting nonsense between stylish set-pieces.

The plot is cobbled together using post-it notes from the Segal/Statham/Jet Li/Luc Besson writers’ brainstorming session; we’ve seen it all before with Bourne, Bond and assorted Missions Improbable, and it apes their style with utter predictability.

Try this: Stone-cold Agent 47 turns rogue against his assassin’s guild to investigate why a corrupt Russian politician should hire a hit on himself. Kidnapping the ‘dead’ man’s mistress (Kurylenko), he sets out to uncover the conspiracy before Scott’s Interpol officer and FSB villain Marklov (Robert Knepper – Transporter III, Stargate Universe) catch up with him.

Needless to say it involves a lot of running, jumping, punching, shooting, kicking, stabbing and blowing stuff up. What did I tell you?

Of course, this being Hitman, we have to have the iconic pose of bald-headed man with big guns crossed over his chest and bald-headed man with barcode tattooed on the back of his head. Apparently there’s so many of these bald, genetically engineered super-assassins in designer black suits running around, you can only tell them apart using one of those FedEx bleep-bleep scanner-thingies.

Who’d have thought you could achieve so much by brain-washing boys with extreme Catholicism, organized crime, and Ave Maria on repeat?

Having despatched the entire Moscow SWAT-team, 47 goes on the run, chasing Russian gangsters.

Other agents of the assassins guild are after him; cue inventive fight in a subway train maintenance pit (very Transporter-inspired), followed by a ludicrous fight scene inside said subway carriage.

Thereafter, it is standard high-gloss action fare, including an update of Arnie’s night-club shootout from Raw Deal.

Director Xavier Gens (The Divide) and writer Skip Woods (A-Team, Swordfish) are squarely to blame for this Euro-pudding, generic shoot-em-up, with Russian Mafia, Interpol, CIA, FSB, DFS and RSI (I may have invented a couple of those), leaving the cast far too much ground to make up.

I will watch Dougray Scott read the phone book; he gets nothing so original to do here. Timothy Olyphant is a favourite TV actor but is as badly cast here as in Die Hard 4.0; just not cold or hard enough. And completely asexual. Would anyone with any testosterone in their body really turn down the repeated advances of a sizzling Kurylenko? Every action cliché in the book, and that’s where they decide to defy convention!

Which leaves us with a lot of gruff macho mumbling, a LOT of graphic violence and not much else.

While some of the Olyphant/Kurlenko scenes sparkle, the rest of Hitman is a strictly by-the-numbers videogame adaptation, just like Doom, Silent Hill and Resident Evil. This doesn’t bode well for Fassbenders’ upcoming Assassin’s Creed. RC

Robin Catling gained degrees in both arts and technology which led to a diverse portfolio of employment. A freelance systems analyst, project manager and business change manager for the likes of American Express, British Airways and IBM, he moved on to web design, journalism and technical authoring. He has also worked in film and television, both behind and in front of the camera, including productions by Steven Spielberg, Martin Scorcese, Ron Howard and Ridley Scott. A qualified three-weapon coach, he runs West Devon Swords teaching sports fencing to all age groups, and in recent years qualified with the British Federation of Historical Swordplay to teach medieval and renaissance combat in the Historical Western Martial Arts.
View all posts by Robin Catling »
« How-to: Use Dashes and Hyphens on the web
Review: A Little Chaos (2015) »