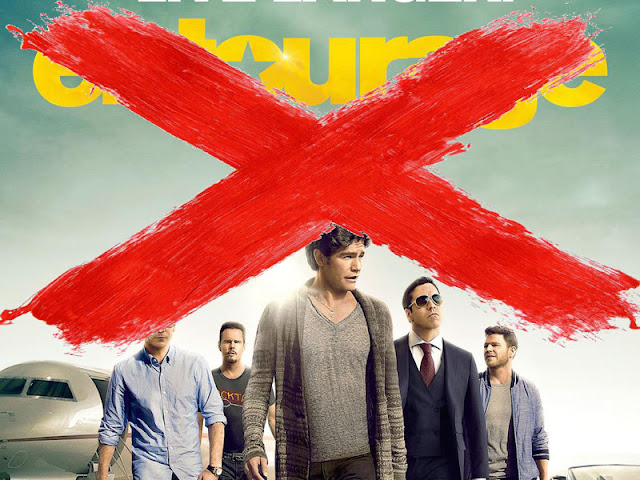 Comedy with no laughs, drama with no dramatic tension and satire that contains no criticism or comment on its subjects, Entourage is a vacuous, pointless, sexist parade of leering, letching and contempt for at least 50% of the population. This is Hollywood as the land of naked ambition and consumerism filled with shallow, vain, self-serving bro-mance boor-doom. As ‘A Good Thing.’

Not even Jeremy Piven’s (Smokin’ Aces) theatrical fireworks as the agent-from-hell Ari Gold (promoted to head of a major studio, still without irony or satire) can save this middle-aged lad’s mag outing of boobs, cars and more boobs, from TV double-episode mediocrity. Entourage was an HBO series which inexplicably ran for eight seasons centred on Vinnie Chase (the unbelievably bland Adrian Grenier), a small-town boy who hits the Hollywood big-time as an actor and takes his friends and hangers-on with him. In a world of ‘entertainment’ that has been overtaken by “Housewives of-“ and all-things Kardashian, summarised as consumer-porn, lifestyle envy, product placement and designer labels, a transcript of the Entourage script reads: “expensive car. Boobs. Even more expensive car. Boobs. Back to cars…”

The entourage of Kevin Connolly, Kevin Dillon, Jerry Ferrara and Jeremy Piven don’t so much orbit as infest Adrian Grenier’s pretentious and shallow actor-turned director, who I think we are supposed to admire as a genuine talent – although the scenes from his blockbuster movie look as (unintentionally?) dire as Entourage itself.

From the moment we find Vincent mourning his divorce (a record nine-day marriage) on a massive yacht off Ibiza with a bevy of topless models and swiftly joined by the boys on a speedboat loaded with beers, we know we’re in lad’s mag heaven and no woman can possibly despise this garbage enough. Until Piers Morgan narrates the catch-up montage for those fortunate enough to have missed the entire TV series.

Piven as the explosive and expletive-laden monster Ari is nowhere near as sharp and funny as he or the producers think he is.

Just to confuse matters, the B-list ‘stars’ are joined by an endless procession of B-list cameo turns by Hollywood names – at least forty two of them and they should all know better – apparently queueing up to guest in this dross. Worst offender is Mark Wahlberg (on whom Vinnie Chase is allegedly based) who looks outright embarrassed – and Wahlberg has himself made some embarrassing pictures.

It’s all a waste as the movie continually dumps plot, sub-plot, character and drama for expensive cars and boobs. Any attempt at sub-text – Hollywood power-brokers dependant on the revenue-raising power of the movie star (completely untrue these days) – is completely undercut by round after round of Hollywood back-slapping. And cars. And boobs.

Not to be missed. You really have to burn every copy. SC

Sue Corsten is a film and TV make-up artist based in the UK.
View all posts by Sue Corsten »
« How-to Stop Skype starting automatically
How-to: Engage or Enrage? Powerpoints to Remember »