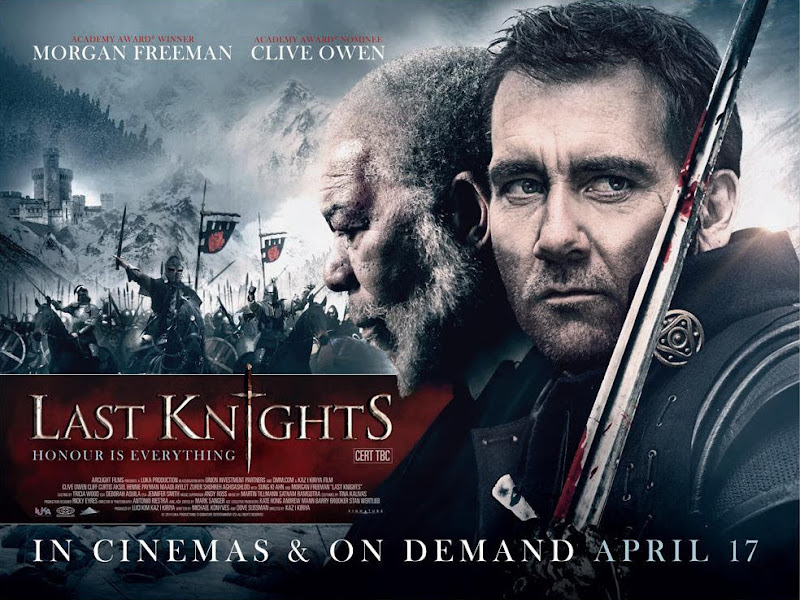 This technically impressive Euro-Asian co-production resets the 47 Ronin (the proper story, not the Keanu Reeves disaster) in a fantasy-medieval, multi-cultural version of the Byzantine Empire, looking for that Game of Thrones crossover.

Utterly predictable at every step, it’s earnest, worthy, straight-down-the-line – and a bit dull.

Other than the utter lack of originality, there is nothing particularly wrong with Last Knights. A dignified Freeman does that elder statesman thing and delivers the longest suicide speech in history – which exemplifies the trouble with the script; it’s all very flat, wordy and dour; in places ponderous. It lacks the gusto of Hercules, Centurion or The Eagle but remains a workmanlike actioner with a serious intent.

The fine collection of European, Chinese and Japanese actors plod through their lines with tones and expressions which telegraph This is a Very Serious Thing. I suppose it’s better than the Pantomime 80’s version of The Three Musketeers.

Even the set-piece finale where the Samurai – sorry, knights – attack the castle is perfectly well-executed yet somehow lacking in tension or drama.

There is nothing especially wrong with the Asian fight choreography which mixes in Wu-Shu, Kali, Kendo and that spinning-around, blade-behind-your-head, stage-fighting nonsense beloved of Jedi movies, although it would help if the characters weren’t wearing armour and weapons not seen in any actual historical era.

Clive Owen gets to re-tread his King Arthur performance as the leading Samurai – sorry, knight – dialling-down his performance to remind us he’s a serious actor; while he has that Gary Cooper, man-of-integrity act down pat,

Robin Catling gained degrees in both arts and technology which led to a diverse portfolio of employment. A freelance systems analyst, project manager and business change manager for the likes of American Express, British Airways and IBM, he moved on to web design, journalism and technical authoring. He has also worked in film and television, both behind and in front of the camera, including productions by Steven Spielberg, Martin Scorcese, Ron Howard and Ridley Scott. A qualified three-weapon coach, he runs West Devon Swords teaching sports fencing to all age groups, and in recent years qualified with the British Federation of Historical Swordplay to teach medieval and renaissance combat in the Historical Western Martial Arts.
View all posts by Robin Catling »
« Movie Catch-up: Jack Reacher (2012)
Review: Child 44 (2015) »