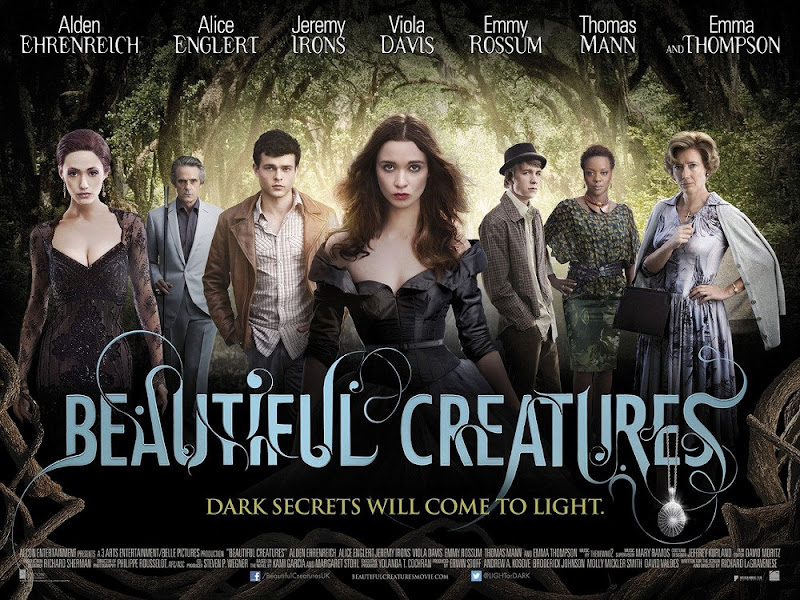 Another near-miss in the hunt for a Young Adult fantasy franchise, post-Twilight; this time it’s witches in South Carolina, closely adapted from the YA book by Kami Garcia and Margaret Stohl, in which star-crossed teenage lovers have to battle ancient curses and the in-laws from hell.

Beautiful Creatures is fortunate to have two, er, beautiful creatures in Alice Englert and Alden Ehrenreich to carry the leads. Which is just as well; their scenes together make for a delightfully tense and sparky rom-com; but step beyond and we’re into hocus-pocus, camp theatricality and hum-drum CGI.

Since Lena Duchannes (Englert – In Fear, Strange and Norrell) is the new goth-girl in town, she gets the catty high school treatment from the born-again virgins of Gatlin, whose prejudice against her Satanist forebears isn’t so wide of the mark. For Lena is a ‘Caster’, a witch about to come of age to face The Claiming (dun, dun, daaah!), where her inner nature will compel her to dark magic or light. There’s always something.

She is pursued by Ethan (Eherenreich – Stoker, Blue Jasmine), a non-conformist, would-be writer, desperate to get out of small-town Gatlin.

The whole dark/light dilemma is routine for the genre (The Craft, Practical Magic, Charmed) with the added complication of Lena’s relatives in a tug of war for the most powerful Caster in the world. Yep, she’s The One. There’s always one.

Luckily our star-crossed lovers have not one but two mentors; the reliable Viola Davis (Mortal Instruments City of Bones) who gravely treats all this fantasy stuff like its Arthur Miller, and Jeremy Irons (Eragon), complete with silver-fox wig, dubious wardrobe and the shakiest accent since Big Russ murdered Robin Hood. It’s a horribly mis-judged performance for all his hard work and winds up pure camp.

By and large, though, the supporting cast do a fine job; Emma Thompson (Saving Mr Banks)delivers a suitably theatrical performance as Mrs Lincoln-slash-Serafina, playing the Wicked Witch of the South, with Emmy Rossum as Lena’s gleefully wicked cousin Ridley.

But they can’t undo writer/director Richard Gravenesse’s uneven treatment, which disappoints after good scripts for Bridges of Madison County, Unbroken, and Water for Elephants. Away from the teen-ish romance (Lena is fifteen going on twenty-five if she’s a day), the set-up and dialogue is clichéd, the magic cartoonish.

Much of the movie is set in a Southern plantation mansion of dilapidated Civil War splendour on the outside, but Tardis-like, a white, modernist space with a flying staircase on the inside; a space that changes colour and decor in a witches wonderland and frequently resembles one of those glossy technicolour fantasy sets from a Gene Kelly musical.

Worth a mention is the Southern folk-inspired soundtrack, worth staying for til the end-credits.

It may be silly and disposable, but the two leads save it from failure with wit and charm. And anything’s better than Renny Harlin’s testosterone-fulled The Covenant.

Sue Corsten is a film and TV make-up artist based in the UK.
View all posts by Sue Corsten »
« Review – Spooks: The Greater Good (2015)
Humour: Knights of the Ikea Table »