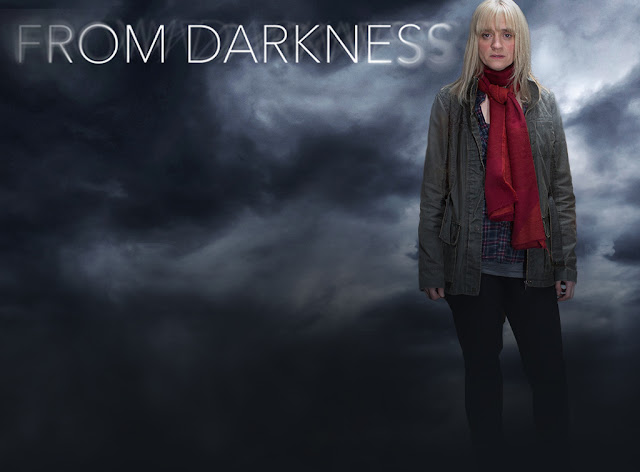 Proving my old adage that you haven’t made it on TV ’til you have your own cop show, this time it’s Ann-Marie Duff’s turn to play detective. Unfortunately this earnest attempt at a female-led cop show to rival the Danes goes off the rails inside three minutes.

Duff (Shameless, Suffragette) is retired constable Claire Church, now living in the Western Isles with her family. All is not as idyllic as it seems; in between Iron Woman race training, Church has flashbacks to a fifteen year old case and is on medication. Inconveniently two dead prostitutes are dug up and ex-colleague now DCI Johnny Hind (Johnny Harris – Black Death) drags Church back to Manchester to ‘assist’ on a cold case.
No doubt about it, Duff is a compelling presence. Never one of TV’s glamour girls, Duff’s striking face is a mask of anguish as Church is forced to revisit the past; unfortunately this is familiar serial-killer, vice squad territory done by any number of ‘dark’ cop shows from Prime Suspect to The Vice to Wire in the Blood.

However hard the superb Duff works, no amount of fast cutting, washed-out Scandi-noir style can disguise that this is an entirely routine cop drama, filled with cop-show clichés.

The worst of which is Hind; “fat, embittered, heavy-drinking, middle-aged male detective. Do you know how much of a cliche that is?” says Church, in a brave, self-aware and utterly mistaken post-modern moment in Katie Baxendale’s script. Played by third Mitchell brother, Eastenders-reject actor Harris, gruffly delivering his lines in a hoarse whisper, his one-note performance is the worst, laziest piece of casting in recent TV history.

How the sensitive Church and the miserable bull dog Hind had their inevitable mid-investigation affair is almost as unbelievable as Hind’s re-bound trophy wife (Leanne Best).

No surprises, then, that another dead woman turns up brutally slain in the same way as the cold case victims, this time bearing Church’s old badge number, and Church is drafted back into the game.

But it gets worse. By episode three, it’s clear that Church is in the middle of a full mental breakdown; she shouldn’t be allowed out of the house unaccompanied, much less ‘consult’ on a quadruple murder investigation.

As police procedural goes, this makes CSI Cyber look like a documentary. Church runs after a suspect alone, at night; she’s being stalked by a copy-cat killer, but fails to report the contact; she and Hind are guilty of trespass, illegal search, intimidating a witness, and interview without legal representation – all while Hind is under investigation for ‘unprofessional conduct’ and whining that his ‘career is on the line’ –  just before Chruch gets drunk on the suspect’s wedding reception booze. These are two of the worst, most inept cops since Crimson Rivers and 36 Quai des Orfèvres.

Come episode four’s hyperventilating and melodramatic conclusion, there’s more illegal searches, a lot of SO19 running about with guns and all the Manchester police manage to catch are two runaway teens. After the shortest, non-event of a domestic hostage episode ever, ex-constable Church loses it big time in a final-frame shocker that is utterly predictable (Seven!) and totally unconvincing.

From Darkness is not The Killing, Borgen, Welsh cop drama Hinterland and certainly not Abi Morgan’s River (more on this one soon).

The experienced and watchable Duff must surely have realised how preposterous this script is, but couldn’t pass up the lead in her own cop show; it’s a fine, angsty performance from a duff (sorry) script that is utterly implausible from start to finish.

Left worryingly open-ended for a second run, let’s hope From Darkness goes back to Darkness and stays there. RC

Robin Catling gained degrees in both arts and technology which led to a diverse portfolio of employment. A freelance systems analyst, project manager and business change manager for the likes of American Express, British Airways and IBM, he moved on to web design, journalism and technical authoring. He has also worked in film and television, both behind and in front of the camera, including productions by Steven Spielberg, Martin Scorcese, Ron Howard and Ridley Scott. A qualified three-weapon coach, he runs West Devon Swords teaching sports fencing to all age groups, and in recent years qualified with the British Federation of Historical Swordplay to teach medieval and renaissance combat in the Historical Western Martial Arts.
View all posts by Robin Catling »
« How-to: Get Windows 10
Review: Suffragette (2015) »