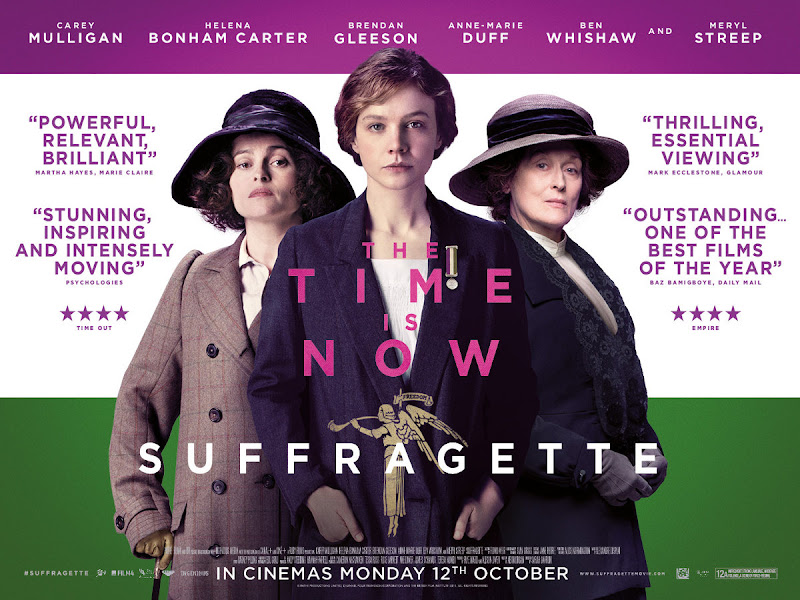 The script has forgiveable flaws; the performances are universally superb; the story is worth the telling in the twenty-first century. So why did director of photography Ed Grau have to spoil the whole thing by smearing vaseline on the lens and shooting during an Earthquake?

Carey Mulligan (Gatsby, Drive) is composite fictional character Maud Watts, pushed reluctantly into the suffragette movement in the 1910’s by an abusive male hegemony. Soon she’s bombing mailboxes, on hunger strike and horse-bothering. It’s not the Ghandi or Les Mis of revolutions; it’s British and it matters.

Mulligan’s East End washer-woman Watts has clearly had an abused, Dickensian childhood, but turns from dutiful wife, mother and worker to urban terrorist in pursuit of the vote. Beatings, jail-time, gruesome forced-feeding and intimidation under a police state only drive her on.

The plot concentrates on Maud and friend Violet (Ann-Marie Duff – From Darkness, Shameless), abused by the trouble-at-t’-mill laundry manager. Abi Morgan’s script feels compelled to concentrate on the every-woman working class characters, when the ones we know best are Mrs Pankhurst, Emily Wilding Davison and Alice Haughton, all well-educated middle class women. All faultlessly played by Meryl Streep, Natalie Press and Romola Garai.

The truth is, however starved and dowdy, Mulligan (well educated, middle class actress) is far too pretty to be convincing as an East End washer woman, despite playing misery and quiet rebellion to award-nomination standards.

Ben Wishaw (Bond, Paddington; also too pretty and with a man-eating moustache) is Maud’s husband Sonny, his masculinity threatened by Maud’s rebellion. Helena Bonham-Carter (Cinderella, Potter) is again a sparky rebel and reliably mad as a box of frogs as pharmacist and post-box bomber, Edith Elleyn.

Emily Wilding Davison (Natalie Press) is a peripheral and thin figure with virtually no dialogue, right up to the point she throws herself under the King’s horse to make herself a martyr. By far the most interesting character in the piece, unfortunately Morgan can’t put Davison stage-centre for all the reasons above. Pankhurst (Streep) gets one inspirational speech, somewhere between ‘Once more unto the breech, dear friends’ and ‘Captain, My Captain,’ with overtones of her Iron Lady performance, and is seen no more.

For the establishment, Samuel West (Strange and Norrell) does another turn as a stiff government minister mouthing the chauvinist attitudes of the day. Maud’s real foil is Bendan Gleeson’s (Calvary, The Guard) Inspector Steed, a bear of an Irishman specialising in counter-insurgency as we now call it, after policing the Irish Troubles. Gleeson has the difficult job of representing a barbaric British Government; while he may not agree with the law, his job is enforcement. Abi Morgan refuses to have any villains in her movie.

Now-familiar surveillance-state tropes aside, the establishment manages to be beastly and inept (how very British) without actually putting a stop to the suffragette movement.

So those are the highlights, but it’s all comprehensively spoiled by the manner in which it’s shot; every single sequence of any action – real or drummed up – is shot in glorious artificial hand-held wobble-cam, usually in tight, tight close-up, so violent that you can’t see what the hell is going on. Ed, I know you’re trying to make it look like a set of Edwardian photographs – but keep the dam’ camera still, I didn’t pay for you to give me sea-sickness. Any time the camera is actually still, the DOP sticks a milk-bottle in front of the camera to push everything so far out of focus not even the Hubble telescope can resolve it. I paid to see this movie but the camera-monkey has decided I shouldn’t. It’s some kind of suffragette-inspired subversive anti-movie terrorism, it must be. And that’s a shame, because Suffragette is a decent movie with a big heart that’s worth seeing – if only you could. RC

Robin Catling gained degrees in both arts and technology which led to a diverse portfolio of employment. A freelance systems analyst, project manager and business change manager for the likes of American Express, British Airways and IBM, he moved on to web design, journalism and technical authoring. He has also worked in film and television, both behind and in front of the camera, including productions by Steven Spielberg, Martin Scorcese, Ron Howard and Ridley Scott. A qualified three-weapon coach, he runs West Devon Swords teaching sports fencing to all age groups, and in recent years qualified with the British Federation of Historical Swordplay to teach medieval and renaissance combat in the Historical Western Martial Arts.
View all posts by Robin Catling »
« Review: From Darkness (BBC TV)
Review: River (BBC TV) »