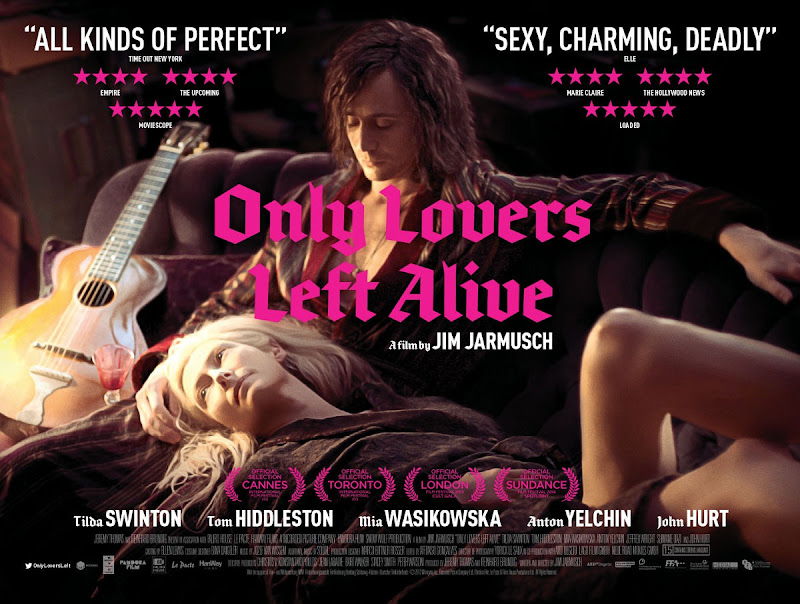 Jim Jarmusch (Ghost Dog, Down by Law) returns as writer-director in this languid, mordant antidote to vampire movies. Tom Hiddlestone (Thor, Avengers, Warhorse) and Tilda Swinton (Narnia) are the undead husband and wife Adam and Eve. Largely ‘vegetarian’ for decades, a changing world threatens their peaceful life in the shadows, an existence unchanged for centuries, may well be lost forever.

Slow moving, intimate, with barely any action but packed with drama and suspense, Only Lovers is the quintessential vampire movie. The subject material may be innately silly, name-checking all the famous writers, musicians and scientists the pair have met down the centuries; but this is a most believable world of the undead.

Adam is the rangy, reclusive musical genius; a musician with an obsession for vintage instruments and a loathing for humans – ‘zombies’. World weary and pessimistic, Adam inhabits a run-down house in the ghost-town of old Detroit and plans for his eventual suicide with a custom-made hardwood bullet. Adam has withdrawn from the politics of the world, his talent turned inward. Hiddleston is perfect as the quiet, black-clad hermit, cuts an anachronistic, romantic figure between Byron and Jim Morrison.

By contrast, Eve, living in Tangier, is the outward-looking optimist, ever looking for the potential and the promise in the world. The most perfect piece of casting sees the white-clad, albino Swinton in her best role for years, away from the histrionic pantomime villainy of Narnia. Eve is open, generous, giving, sharing, and a scholar of literature.

Unfortunately, the pair are trapped by the circumstances of their condition. Between war, politics, and the tendency for humans to contaminate their blood, vampirism is becoming more and more difficult a way of life. Living as addicts from fix to fix, Adam and Eve navigate the tricky path, resisting the urge to kill, staying out of the light. Jarmusch cleverly blurs his definition of vampirism, partly supernatural, mostly medical, he is more concerned with its consequences than its causes.

Swinton and Hiddleston have a good rapport, you can believe in two strong people who’ve been married for centuries, remained in love and yet still have two distinct lives and personalities.

The pair are ably assisted by the supporting players; Anton Yelchin (Star Trek, Fright Night) is unrecognisable as Adam’s stoner sidekick, while ever-reliable John Hurt (Immortals, The Proposition) is Christopher Marlowe – yes, that one – as Eve’s mentor and friend. Jeffrey Wright (Hunger Games) cameos as Adam’s haematologist – well, dealer, actually. Mia Wasikowska (Jane Eyre) as Eve’s sister Ava, is the catalyst for the unravelling of the third act, arriving in Detroit, an unreformed, immature wild-child with no impulse control and a history of deadly mischief.

Several things make Only Lovers a cut above the recent crop of vampire flicks: Jarmusch’s script and direction is langorous, subtle and intelligent, underpinned with irony and wit. It is as far from the ridiculous twee teen pulp of Twilight or TV’s Vampire Diaries, the overblown action of Fright Night, or the melodrama of Coppola’s Dracula. It has real grit which was lacking in the vampy, campy Interview with the Vampire or even Byzantium (verdict here soon), and is so much more cool than comic-book hero Blade.

Only Lovers is a musing on the life immortal, how it affects beings who live for centuries, beings with all the time in the world, while everything changes around them.

Another must mention is the score, from classic soul records to Adam’s gothic funeral guitar rock, to contemporary Lebanese crossover-fusion (the best description I can come up with).

With very little blood, the horror is mostly implied, without the usual impalings and CGI cavorting. Grounded, well realised, this is a true drama about immortality. RC

Robin Catling gained degrees in both arts and technology which led to a diverse portfolio of employment. A freelance systems analyst, project manager and business change manager for the likes of American Express, British Airways and IBM, he moved on to web design, journalism and technical authoring. He has also worked in film and television, both behind and in front of the camera, including productions by Steven Spielberg, Martin Scorcese, Ron Howard and Ridley Scott. A qualified three-weapon coach, he runs West Devon Swords teaching sports fencing to all age groups, and in recent years qualified with the British Federation of Historical Swordplay to teach medieval and renaissance combat in the Historical Western Martial Arts.
View all posts by Robin Catling »
« Review: River (BBC TV)
Review: River (BBC TV) »