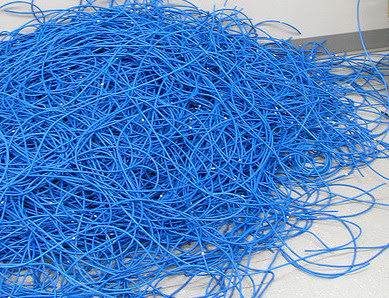 The perils of being the ‘knowledgeable friend.’ At this time of year, this means family and friends acquire all sorts of shiny new tech kit, then ask someone with half a brain to help set up their home network. This often means me. Down the phone line. From a different country.

So here we go; network-y-type things you need to understand. I’m sure any network managers reading this will think I’m an idiot. That’s fine. Go play with your cable crimpers, boys, this isn’t for you.

Ergo, if it’s a web-server, or a storage device like a NAS, or SAN, or personal home server, you need a network connection.

LAN versus WAN
LAN stands for Local Area Network, which is anything in your building or site connected with cables or wireless signals. Local, as in a closed network that doesn’t connect any of it’s component parts via the Internet .

WAN stands for Wide Area Network, where you connect devices over large distances using some service via the Internet. This makes connections across sites.

So my home network is a LAN. My work network which connects our various offices together is a WAN. The Cloud is a super-duper WAN that uses the Internet to connect lots of WAN’s together.

Ethernet
Ethernet is the wiring standard that nearly all cabled-up local area networks use. Any device capable of taking a wired connection will have a built-in Ethernet adapter, commonly called a NIC, or Network Interface Card. Ethernet comes in different speeds.

Wi-fi
Wi-fi refers to wireless networking. Based on the 802.11x radio standards, early wi-fi under 802.11b ran at a maximum speed of 11 Mbps. That was replaced by 802.11g – 54 Mbps. Now we have multichannel 802.11g and 802.11n standards, which increase the speed and range of the wi-fi connection. Don’t believe a word of the specs quoted on the box of your wireless router, those all refer to perfect laboratory conditions as imagined by marketing departments. By the time you account for weather, the steel in your building and the overhead of network adapters talking different dialects of 802.11-whatever, you’ll probably get a third to a half of the quoted speed.

The best performance will always come when the devices match the network router – having 802.11n in the device and the network router for example. Fortunately the n, g and b standards are all backwards compatible, so you could connect a ‘b’ device to an ‘n’ network, but it will only run at the ‘b’ speed.

Bluetooth
I hate Bluetooth. It’s a wireless networking ‘standard’ in the loosest sense, invented by the telecoms industry as a low-power protocol for cell phones, PDAs, and laptops to connect headsets, cordless mice and keyboards, and do some rudimentary file sharing or chat. You have to pair up devices on an exclusive two-party connection and it has very short range – line-of-sight, in the same room, or the next room in a small building. That’s it. It is so limited that nobody in IT considers it proper networking,

Importantly, the bandwidth is an upper limit on the size of the network ‘pipe’. A 1.2 Mbps connection has 1.2 to share between however many users are connected, so it becomes a shared resource if two users connect. They might get roughly half that each if they both try to download large files att the same time (although that’s not guaranteed and many factors can influence the split).

If you ever used an analogue dial-up modem, you might have got 56 Kbps, or 0.056 Mbps out of it. My home broadband connection runs at 10 Mbps. A fast Ethernet-based local network will typically run at 1,000 Mbps. A cell-phone wireless 3G connection might get as high as 1 Mbps, with good reception.

TCP/IP
TCP/IP is a collection of protocols, used in all Internet communications and current LANs as a standard means of sending data across networks. It is a packet-based protocol that splits the originating data, sends it, then reassembles it in the right order at the destination. It is fast, robust, error-correcting, cheap to implement in hardware and software and therefore ubiquitous. I love ubiquitous.

IP addresses
An IPv4 IP address is a set of four numbers, for example 217.174.250.137 that identifies to a single computer or device on a TCP/IP-based network. Each address block ranges from 0 to 255, multiply that up you get about 4.3 billion possible combinations. But a lot of those have been reserved. The newer IPv6 standard has 128-bit addressing, so the addresses are four times as long – you do the math, the possible number of addresses is huge.

There’s currently a fuss over the current TCP/IP standard called IPv4, which has a very short address-length of 32 bits. Basically the world has run out of addresses, as we add billions of routers, hubs switches and standalone devices to the Internet. IPv4 has become a very small post office for all those packets of data that need to go to unique addresses. Add the Internet of Things – central heating systems, CCTV cameras, traffic signals, weather stations, fridges, toasters – the demand for network addresses has gone beyond IPv4’s address range. And while IPv4 is in being replaced by IPv6 using 128-bit addresses, that isn’t happening fast enough.

We humans don’t generally use the IP numbers to locate and identify destinations on the Internet, however. We prefer domain names like google.com, cat-pictures.net and custard-recipes.info.

Domain Name Servers (DNS)
On the Internet, Domain Name Servers act as the local post offices to work out the actual IP address to send data packets directed at named hosts, such as google.com. If the domain doesn’t exist within DNS, along with a valid IP address, you ain’t talking to it.

That’s probably enough for part one. Next time, we’ll think about building some useful connections in the real world. AJS

One thought on “How-to: Computer Networking Primer Part I”