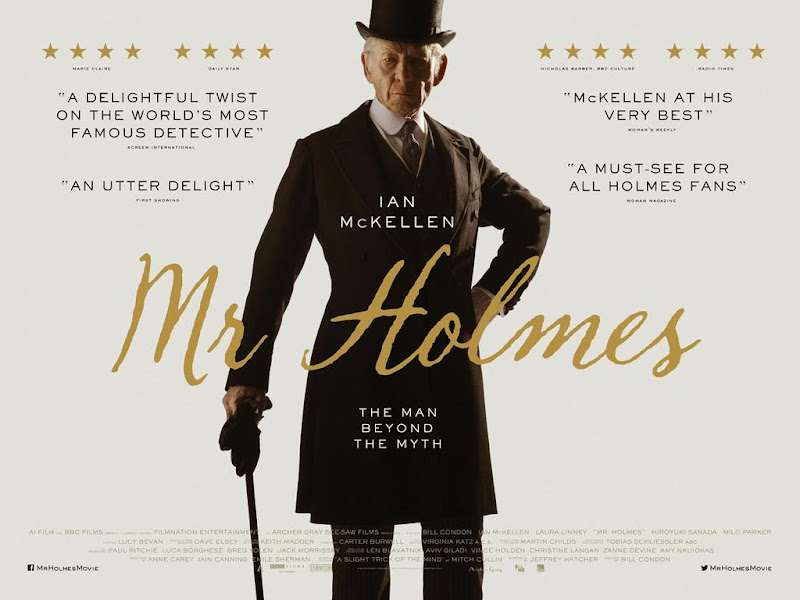 Southern England, 1947: returning from a mystery trip to Japan in search of herbal remedies, a long retired Sherlock Holmes faces up to mortality, but can’t quite shake the last case that led to his retirement. A man out of his time, Holmes must come to terms with the post-world war nuclear age and the loss of the incredible mental faculties that made him the world’s most famous detective.

Now all that remains is to solve a 35 year old mystery, while teaching a ten year old boy about bee keeping.

An imaginative sequel, Mr Holmes plays with the idea of what Holmes did after Watson married and moved out of Baker Street; how Holmes snuffed out his own detecting flame to slide into obscurity and a rather dull 35-year retirement. One can’t help but think it’s all slightly unworthy; but then we can’t all be Jean-Luc Picard or Indiana Jones.

Ian McKellen (X-Men, The Hobbit) plays Holmes at 92 and 57, a fragile and irascible old man, and the iconic, but fading great detective. As is usual with this variety of revisionist literary adaptation, much fun is made of the reality gap between the ‘real’ Holmes and the ‘fictional’ version made famous by Dr Watson’s accounts of their adventures – all very meta.

MacKellen could easily upstage his supporting cast but they more than hold their own; Milo Parker as young Roger has natural ability and presence, and Laura Linney as his mother, the stolid house-keeper and war-widow Mrs. Munro, is at her best since Love Actually. Hattie Morahan is the grieving mother Ann Kelmott. Old faithfuls Roger Allam (The Woman in Black, The Lady in the Van) and Frances De La Tour (Harry Potter, Hugo) deliver comfortable character parts,

A small step up from one-off TV drama, Mr Holmes is a poignant, melancholy movie that promises to rework a classic Holmes mystery, but is more concerned with regret, loss and ageing. Quietly and delicately directed by the safe Bill Condon (Twilight: Breaking Dawn), there is no big villain and no great criminal conspiracy – but it is very concerned with matters of life and death.

Admire the performances which are universally good, but don’t expect the fireworks of Robert Downey Junior, the intense lightning-spark of Jeremy Brett, or the flashy post-modern satire of Benedict Cumberbatch. This is a movie, like Holmes, curiously out of time; A Saga Holidays, Best Exotic Mr Holmes. Nothing wrong with that. RC.

Robin Catling gained degrees in both arts and technology which led to a diverse portfolio of employment. A freelance systems analyst, project manager and business change manager for the likes of American Express, British Airways and IBM, he moved on to web design, journalism and technical authoring. He has also worked in film and television, both behind and in front of the camera, including productions by Steven Spielberg, Martin Scorcese, Ron Howard and Ridley Scott. A qualified three-weapon coach, he runs West Devon Swords teaching sports fencing to all age groups, and in recent years qualified with the British Federation of Historical Swordplay to teach medieval and renaissance combat in the Historical Western Martial Arts.
View all posts by Robin Catling »
« Review: Windows 10 ‘Threshold 2’
How-to: Resolve PayPal card rejections »