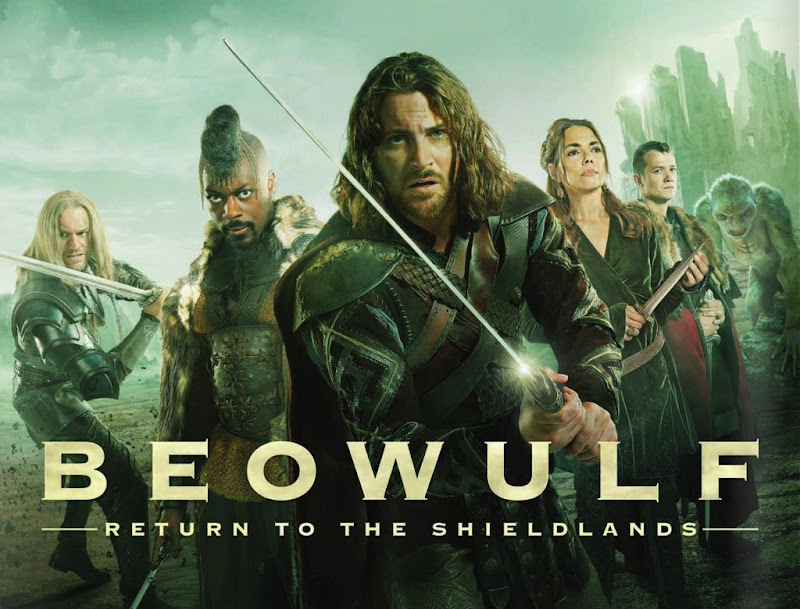 Aiming for the early Sunday night audience again, ITV re-boots the epic poem as a Game of Thrones slash Hobbit generic fantasy in a bleak Cumbrian landscape; it’s dark  earnest, but completely lacking any spark of energy or originality.

Persuaded to pitch his Beowulf as a generic dour Northerner somewhere between Kit Harrington and Sean Bean, Kieran Bew has the accent and the hair to glower through, but appears entirely disinterested in the whole proceedings. Whatever happened to the larger-than-life, passionate and reckless hero of the epic poem?

After a thrilling prologue, it all turns pedestrian as Beowulf returns to his childhood home for the funeral of adopted father William Hurt (The Host), thane of Harot, now succeeded by wicked step-mother (Joanne Whalley – The Borgias, Jamaica Inn – keeping the whole show on the road). Accompanied by a shifty Irish rogue of a sidekick, barely speaking the English Rose he left behind, serially threatened by his cowardly half-brother and surrounded by a multi-ethnic cast of whatever generic fanstasy land we’re in, Beowulf is caught up in the succession battles of the Sheildlands, and beset by shape-shifting Mud-bloods (trolls, troglodytes, lycanthropes, whatever…). The majority of Beowulf’s problems are with the human cast, most of whom show more character and depth than he does.

There’s a lot of cod-Dark Ages mumbling about succession and politics and wars and councils of thanes of this and that. A couple of the thanes are full on Afro-Caribbean actors dressed by the Mad Max costume department, so they don’t stick out in the slightest.

Harot is essentially one well-crafted set trying to look like an entire kingdom. Which is difficult as it’s clearly a former Weardale quarry. Still, it’s a change from Ameberley Chalk Pits (Dr Who, 1970’s, 80’s, 90’s). There’s a lot of timber gantries and walkways and the thane’s hall, peopled by too few extra’s. It’s not exactly Winterfell. There’s nothing to make you want to live here as we had in Peter Jackson’s kingdom of Rohan. Perhaps that’s the diffeence between New Zealand and the North East of England.

Two episodes in and there’s a distinct lack of action. The CGI creatures are rendered nicely but move weightlessly, which means the effects were done quickly, on the cheap. A couple of punch-ups, a bit of riding a bit of chasing, a lot of time in Northumberland’s moorlands and woodlands and a distinct lack of epic.

Which means the best we can say about ITV’s generic fanstasy is that it’s very… generic. And that just ain’t good enough. RC

Robin Catling gained degrees in both arts and technology which led to a diverse portfolio of employment. A freelance systems analyst, project manager and business change manager for the likes of American Express, British Airways and IBM, he moved on to web design, journalism and technical authoring. He has also worked in film and television, both behind and in front of the camera, including productions by Steven Spielberg, Martin Scorcese, Ron Howard and Ridley Scott. A qualified three-weapon coach, he runs West Devon Swords teaching sports fencing to all age groups, and in recent years qualified with the British Federation of Historical Swordplay to teach medieval and renaissance combat in the Historical Western Martial Arts.
View all posts by Robin Catling »
« Review: Jekyll and Hyde Season 1 (ITV)
How-to: The redundancy survival kit »