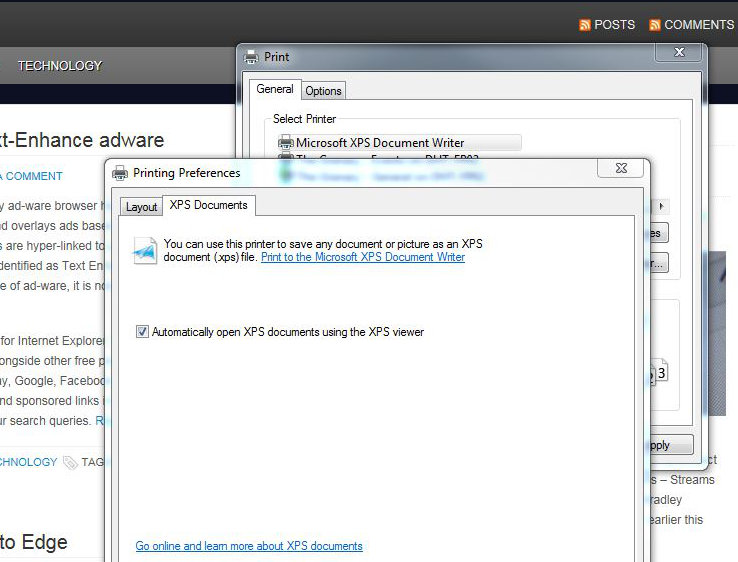 Once touted as a ‘PDF-killer’ – that never happened – Microsoft continues to embed XPS, so all Windows versions include better support for XPS files than PDF files. Microsoft even published it as an open ‘standard’. Designed as a fixed-format file, similar to PDF or PostScript files, Microsoft included support for digital signatures and DRM – just like PDF.

XPS didn’t catch on from Vista, because everyone hated Vista and pretty much everything that came with it. By the time Windows 7 arrived, XPS had missed the boat. So what did Microsoft do for Windows 8? Revised the format and the file extension to OXPS, or OpenXPS. Although it’s the standardized version of the original XPS format, it’s actually not compatible with the XPS Viewer included with Windows 7, requiring conversion back to XPS if you want to view Windows 8-generated files on Windows 7.

That’s compatibility for you.

Windows Vista, Windows 7, 8 and 10 all include built-in XPS tools. Essentially you ‘print’ documents to XPS format using the Microsoft XPS Document Writer, a virtual printer named doing the same as ‘print to PDF’ in Office and other programs. The other software bundled is the XPS Viewer application which enables you to view XPS documents on your device.

When to use XPS Files

Short answer: don’t. Hardly anyone creates XPS files, because hardly anyone wants to use them.

Longer answer: when you want a takeaway soft-copy of a web page or document that you can’t save to a common readable file format and you can’t install a PDF printer on the device you’re at. So pretty much, XPS is the Windows file format of last resort. As evidenced when Windows 8 included a PDF viewer.

Neither Apple devices, Android or Linux include XPS file support, but they do include built-in PDF support. There are few third-party viewer applications that can read XPS files.

The prosecution rests, Your Honour. AJS