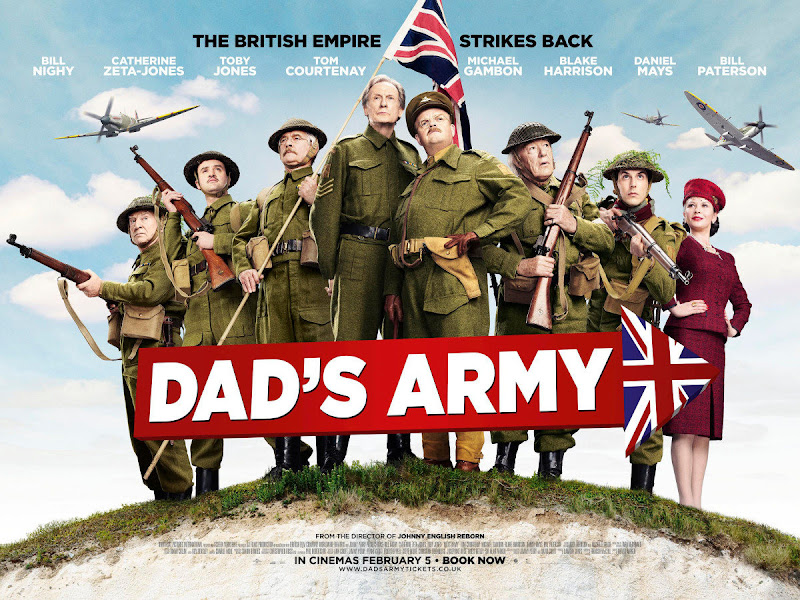 This won’t mean much to the rest of the world, but to Brits bought up on the 70’s sit-com of the Home Guard defending Britain against the Nazis, this is a surprising gold reboot; mischevous, whimisical and true to its source, Jones, Nighy and Gambon pull off an unlikely comedy hit.

So who do you think you are kidding Mr Hitler?

You could hear the groans of apprehension around the country as the Dad’s Army reboot was announced, after all, the movie industry doesn’t have a great track record of adapting sit-coms (Are You Being Served being one of the worst movies ever made). But the two In-Betweeners proved it could be done with the right script, even if you send the cast on holiday – the classic trick to ‘open up’ the comedy for the bg screen that failed in every other attempt. It’s not easy. Even the 1970’s ‘origins’ movie of Dad’s Army was a little flat, although it gave the faltering Warmington-on-Sea platoon of the Home Guard an uplifting heroic boost.

Thanks to the Best Exotic movies and others made for older viewers, the time has come for the Dad’s Army resurrection. Could the producers write and cast a movie that wouldn’t trample the memory, or fatally ‘update’ the Home Guard for current audiences?

Fortunately Dad’s Army sticks to the core values of the Croft and Perry original and remembers Perry’s basic setup: the old man, the young man and the pompous man. Add a light-weight farce of German spies, carrier pigeons, plans for the Allied invasion and plenty of room for the cast to bumble about, bicker and fall over, and we have a sure-footed hit.

Star billing goes to Toby Jones (Snow White, Tinker Tailor) as bank manager and part time Captain Mainwaring, vain-glorious, pompous; a small man in a big world; an idealist and dreamer let down by his own inadequacies. Jones doesn’t impersonate the peerless Arthur Lowe, but its a pitch-perfect impression that finds new layers in the character.

Bill Nighy (Best Exotic, Jack the Giant Slayer) as the quiet and diffident Sargeant Wilson does his usual Bill Nighy schtick whilst making the aged lothario a deeper character than the Le Measurier original.

The mighty and imposing Michael Gambon (Potter, Paddington) manages to hang on to Private Godfrey’s fussy and faltering manner, dialling down the performance for a comedy masterclass. Tom Courtney (Quartet) plays down the blustering old soldier Corporal Jones, revealing the paper tiger beneath the bravado. Token Scottish actor Bill Paterson doesn’t appear to know quite what to do with Private Fraser, the undertaker.

Imported from In-betweeners Blake Harrison, does a remarkable turn as bank clerk Private Pike, given a much bigger role, as does Daniel Mays as Spiv black marketeer Private Walker.

Special mention goes to Frank Williams, the original vicar of Warmington on TV, who reprises the role here. It’s good to see a familiar face, as it should be for Ian Lavendar (TV’s Pike), unrecognisable now as Army top brass Brigadier Pritchard. Not so successful is Mark Gatis as Mainwaring’s superior, Col. Theakes; although if you want an upper-class slimy Brtish Officer, I suppose Gatis is your man.

In a concession to modern times, as have a much expanded role for the female characters, almost all of whom are now in the women’s ATS to rival the Home Guard. Familiar UK TV actress Sarah Lancashire is Mavis Pike.

In a threatened mis-step, TV’s unseen Mrs Mainwaring is brought to life as the Captain’s formidable, overbearing wife in a central role; which could have gone terribly wrong but for Felicity Montague and the right tone in her scenes with the Captain. Add Alison Steadman’s Mrs Fox, Annette Crosby and Julia Foster as the Godfrey sisters, and – shock – Pike’s got a girlfriend, Vera (Holli Dempsey) and there’s nearly a full compliment. The final addition is Catherine Zeta-Jones as Rose Winters – or Nazi Agent Cobra. Written as the kind of film-noir, femme fatale, running rings around Warmington’s male and female residents with her Hollywoood glamour, this should be the kind of vamp in which Zeta-Jones should excel; but strangely it seems her heart isn’t in it or she simply can’t raise her game sufficiently to content with the old stagers around her. Aside from ‘the sofa scene’ as we’ll call it, with Mainwaring, Wilson and Pike, her scenes are flat, as she makes for the least convincing and most obvious spy of all time – even allowing for the casual sexism of the 1940’s – “she can’t be a spy, she’s a woman.” Nobody saw Garbo’s Marta Hari at the Roxy, then?

This version comes across more edgy than the TV series; certainly the Warmington Home Guard was always fractious and a little divided; but, nearing the end of a long war on the home front, this crew seem to quiet openly dislike and disrespect each other, pretty much all of the time.

To round off the slapstick, pratfalls, and romantic mis-adventures, there is of course, the obilgatory action climax with obvious heroism against a German U-boat, where everyone gets to do something uncharacteristically brave. I prefer Arthur Lowe’s quiet courage at the end of the 1970’s movie, however; tension wins out over explosions every time, but perhaps that’s just me?

Handsomely mounted, this is clearly a small British film and no International block-buster. It’s shot like a TV movie (though not intentionally?), looks like a TV movie and plays like a TV movie; it also has some of the worst CGI you’ve seen since the 1990’s. But Jones Nighy, Gambon et. al kept me laughing through to the end-credit out-takes. March on, Dad’s Army. RC

Robin Catling gained degrees in both arts and technology which led to a diverse portfolio of employment. A freelance systems analyst, project manager and business change manager for the likes of American Express, British Airways and IBM, he moved on to web design, journalism and technical authoring. He has also worked in film and television, both behind and in front of the camera, including productions by Steven Spielberg, Martin Scorcese, Ron Howard and Ridley Scott. A qualified three-weapon coach, he runs West Devon Swords teaching sports fencing to all age groups, and in recent years qualified with the British Federation of Historical Swordplay to teach medieval and renaissance combat in the Historical Western Martial Arts.
View all posts by Robin Catling »
« How-to: The Professional Voice
Review: Slow West (2015) »