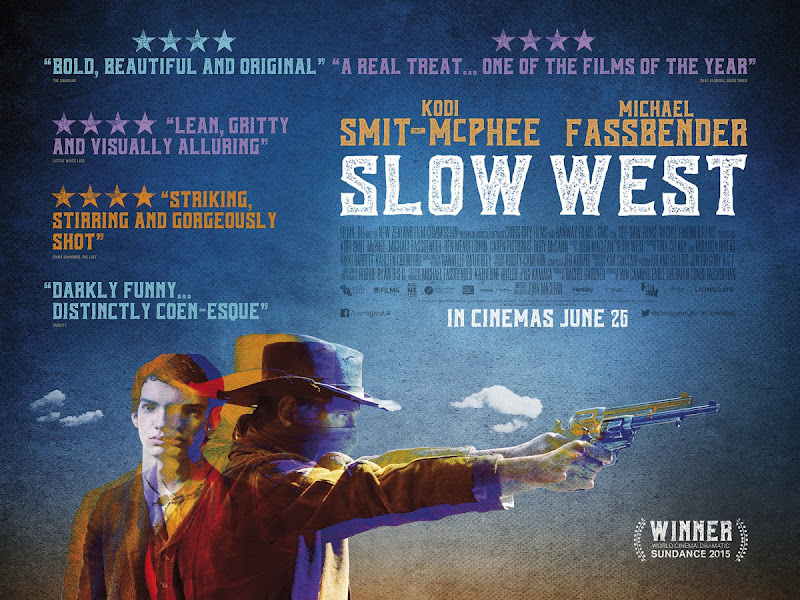 A Scotsman and an Irishman go to the Wild Frontier – it’s not the start of a joke, it’s Slow West, a low-budget meander through the bleak Wild West. Fassbender’s lone gun-slinger Silas befriends Kodi Smit-McPhee’s lovelorn Scottish laird, Jay. But the girl he’s pursuing has a price on her head and there’s a gang of outlaw’s after the reward money. Will the immigrant odd couple get to her before they do? And what is Silas’ motive for helping?

Sundance-winning Slow West has epic New Zealand standing in for the epic landscapes of the Old West, and despite nods to old Westerns of bank robbers, bounty hunters, men with no name and fewer words, this is an altogether more complex, European-inflected affair.

As the lovelorn Scot pursues the fugitive love of his life across the deadly, wide open landscapes of 19th century America, there’s nothing so deadly as the other newcomers to this wide open land. Army deserters, brigands and desperate settlers determine to kill each other as fast as the Western wilderness.

This quiet, understated Western is filled with the sudden violence of a lawless frontier, something writer-director John M. McClean uses to ratchet up the tension all the way to a gritty climax.

We can trust no one along the Wild frontier, from the weary survivor Silas (Fassbender, X-Men, A Dangerous Method) and the self-deluded dreamer Jay (Smit McPhee, The Road, Let Me In) to the dangerous but charming bounty hunter Payne (Ben Mendelsohn, Place Beyond the Pines, Dark Knight Rises). By the time we catch up to the complicated Rose and her father, it’s become an ensemble piece.

This Western drama is clearly influenced by contemporary cinema to undercut the mythic Western at every turn. Silas really is a mercenary son of a gun, little better than Payne and his determined, but inept gang. The black-hatted sniper in the corn field fails to cover his back. Two desperate settlers fail to pull off a store robbery, and in the process we discover Jay is not so noble after all when self preservation is at stake.

Using the West to consider the nature of life, love, loyalty, betrayal, Slow West is perhaps slightly baggy, not afraid to meander off the trail into often-comic diversions. Even an old-timer’s campfire anecdote becomes a tense set-piece. This is no grand heroic, mythological West, rather a desperate wilderness full of all kinds of undignified death and mayhem, not a tidy place of black hats and white hats,

There are no heroes and villains, just a group of more or less inept, rootless wanderers trying to get by, in a hostile land. How the West was far from won, just occupied by the resilient and the lucky.

Robin Catling gained degrees in both arts and technology which led to a diverse portfolio of employment. A freelance systems analyst, project manager and business change manager for the likes of American Express, British Airways and IBM, he moved on to web design, journalism and technical authoring. He has also worked in film and television, both behind and in front of the camera, including productions by Steven Spielberg, Martin Scorcese, Ron Howard and Ridley Scott. A qualified three-weapon coach, he runs West Devon Swords teaching sports fencing to all age groups, and in recent years qualified with the British Federation of Historical Swordplay to teach medieval and renaissance combat in the Historical Western Martial Arts.
View all posts by Robin Catling »
« Review: Dad’s Army
Review: Kill Me Three Times (2015) »