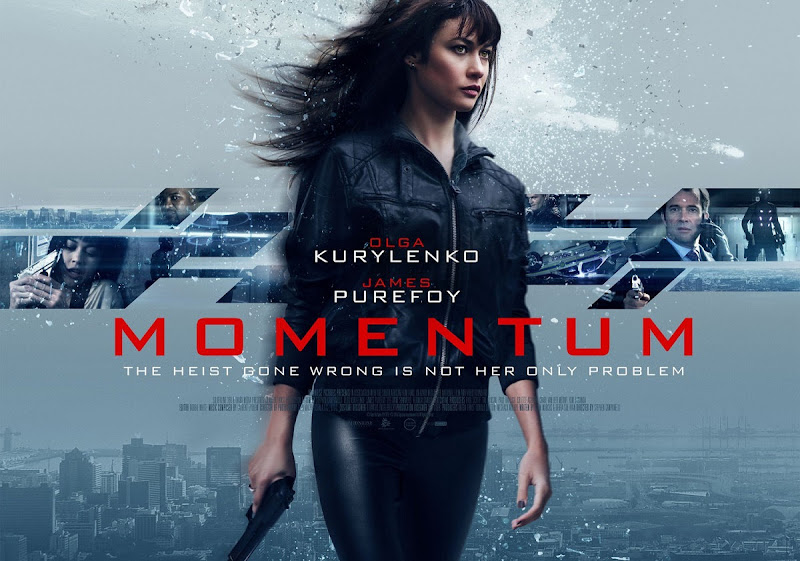 “Let’s do a heist-chase-spy thriller like Salt – that made money. We need a strong female lead to carry it like Angelina – Kurylenko’s a babe, she can do it. Get Morgan Freeman to do his corrupt elder-stateman thing. And we need a British villain – Purefoy, he’s available, and cheap. Couple of car chases, couple of shoot-outs; make it cheaply in Jo’berg – done!”

While it is quite stylishly shot in that generic Jack Reacher slash Salt slash Hitman action-thriller fashion, the action is so-so, the thrills utterly predictable and the dialog full of those tedious macho-action-thriller cliches beloved of Hollywood hacks trying to please the money-men.

The always watchable Kurylenko (Centurion, Quantum of Solace) is the spy-turned-bank robber with the shady past; she does admirably trying to carry the dead weight of this movie, running Zoe Saldana’s Columbiana or Gina Carano’s Haywire a tight race as a female action heroine, but is left struggling in the deep end, looking like a cut-price Angelina.

Poor gentleman James Purefoy (John Carter, Ironclad) is the hapless head of a rogue US senator’s ‘cleanup crew’ and has pages of Basil Exposition to deliver to keep this soggy script moving at all, as it bumps along like a student driver with poor clutch control. I just don’t believe in him as a hard villain either here or in TV’s The Following. His Mr Washington is just another British villain trying to keep it understated while his inept crew of toughs get beaten up by a girl. I know Purefoy is much better than this kind of cut-price Michael Nyquist fodder.

Freeman (Last Knights, Oblivion) phones in (literally for most of the movie) a cameo performance so workmanlike, he ends up looking like a cut-price Morgan Freeman.

The object of their running, shooting, jumping, driving, stabbing, torturing procession of racism and mysogeny tinged with a mean-spirited tendency to lary, leery violence toward women? Some guff about stolen diamonds and a computer flash drive with the plans for the Death Star – sorry, the next 9-11.

Clearly everyone involved in this in front of and behind the camera knows their stuff and can make better movies than this. Which is why it’s a little insulting they turned in this pointlessly bloody and profane excuse for a thriller without an original thought in it’s head, but a .

Robin Catling gained degrees in both arts and technology which led to a diverse portfolio of employment. A freelance systems analyst, project manager and business change manager for the likes of American Express, British Airways and IBM, he moved on to web design, journalism and technical authoring. He has also worked in film and television, both behind and in front of the camera, including productions by Steven Spielberg, Martin Scorcese, Ron Howard and Ridley Scott. A qualified three-weapon coach, he runs West Devon Swords teaching sports fencing to all age groups, and in recent years qualified with the British Federation of Historical Swordplay to teach medieval and renaissance combat in the Historical Western Martial Arts.
View all posts by Robin Catling »
« Review: Kill Me Three Times (2015)
Review: Mission Impossible Rogue Nation »